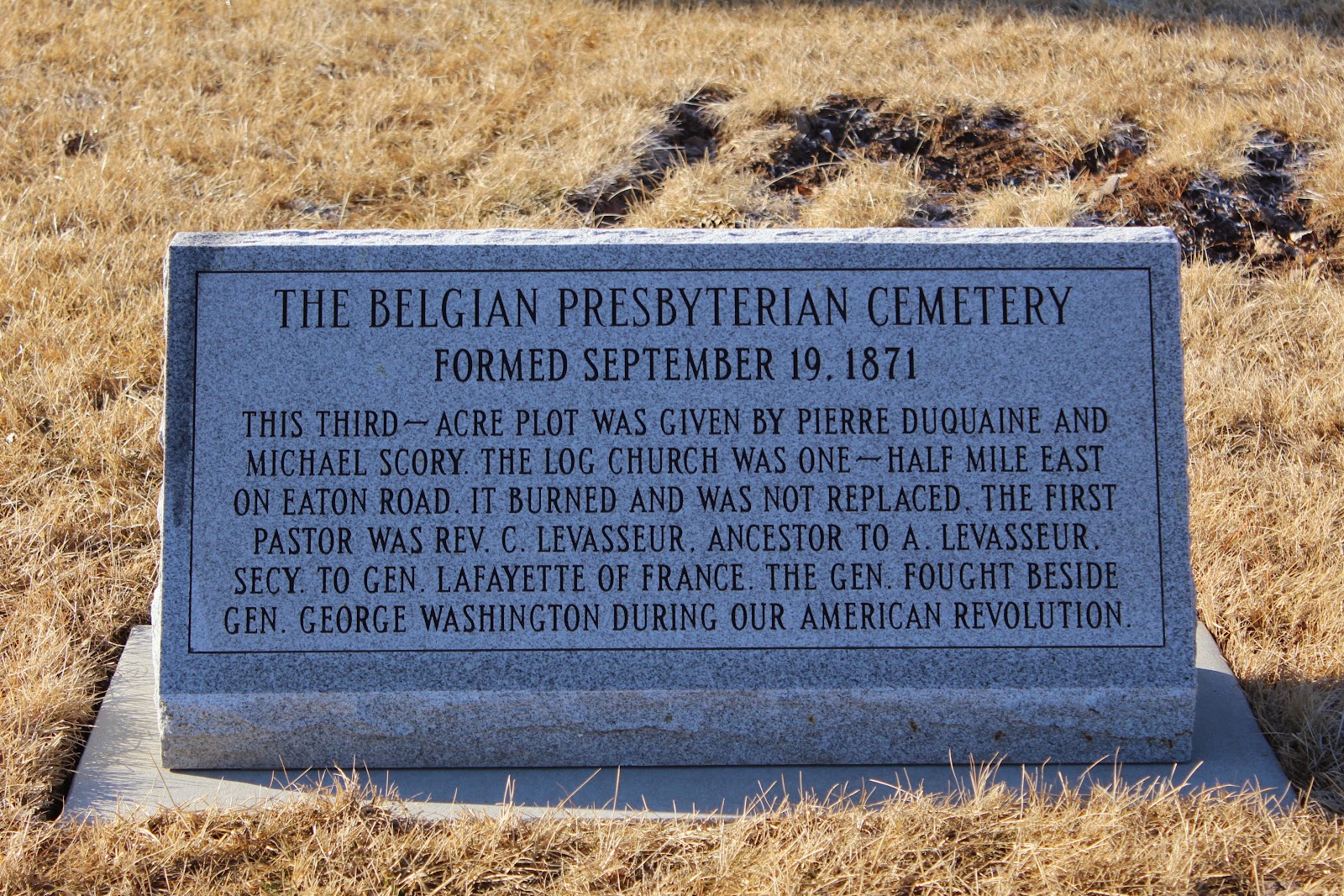 This third-acre plot was given by Pierre Duquaine and Michael Scory. The log church was one-half mile east on Eaton Road. It burned and was not replaced. The first pastor was Rev. C. Levasseur, ancestor to A. Levasseur, Secy. to Gen. Lafayette of France. The Gen. fought beside George Washington during our American Revolution.

The marker is located on eastbound Eaton Road, east of its intersection with Ontario Road, at 3186 Eaton Road, Green Bay, Wisconsin 54311.

The following information provided by Dan Meunier, a Scory relative, appeared in the December 2012 issue of the The Historical Bulletin of the Brown County Historical Society:

A historic (sic) marker designating the site of the Belgian Presbyterian Cemetery found its respond place on Friday, Oct. 19. Helen (Krueger) Sodor sponsored the marker in honor of her great-great grandparents, Michael and Prudence (Hembise) Scory), immigrants from Charleroi, Belgium, who purchased a farm on Eaton Road in Bellevue in 1986.

The cemetery was formed in September, 1871, by the Belgian Presbyterian Church with land donated by Michael Scory and Pierre Duquaine. The church burned down but was not rebuilt, compelling many members to travel to Green Bay for services at the French Presbyterian Church which later became Grace Presbyterian Church. The cemetery continued to be used for burials by the two families who donated the land until the 1970s. The Scory family sold the farm in 1970, although the original homestead still stands at 3158 Eaton Road, next to the new Village Hall.

Both the three-acre cemetery and historic (sic) marker are located in front of the Messiah Lutheran Church at 3186 Eaton Road n Bellevue on land that was part of the original Scory farm.

The foregoing content used with gracious permission of the Brown County Historical Society.


My husband Harold ("Harry") is a direct descendent of the Duquaine family members buried here. His Uncle Reginald was the last burial in 1991. On 9/22/2015 his cousin Keith Heim was laid to rest here. There are three young people not related to either family -- Mary, Philip and Peter Tielens, who died in 1880, 1883 & 1884. They are believed to have been moved from the cemetery at the church after the church burned down. The rest of the Tielens family is buried in the Town of Humbolt Presbyterian Cemetery, which was established in 1900.

Edwin & Bernard (who own the August Lindsley farm where the church was located) remember there were several burials at the church and that the bodies were later moved to the Duquaine-Scory cemetery down the road, but their graves were marked only by wooden crosses. My husband has a vague memory of this also.

The Duquaine family has taken care of the cemetery for many, many years. Grandma Dora used to cut the grass with a push mower. Later Uncle Rick (Reginald); my father-in-law, Harold, Sr.; Urban Heim (son-in-law to Peter & Dora); my husband and I; and, the last several years, Keith Heim, who now rests here. With nearby Messiah Lutheran Church in the background. 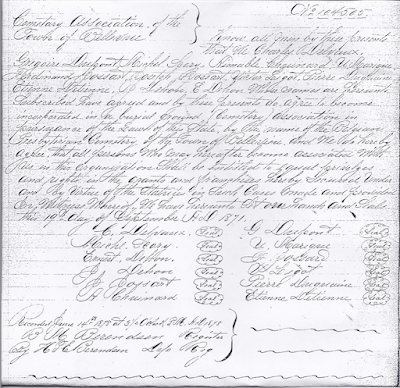 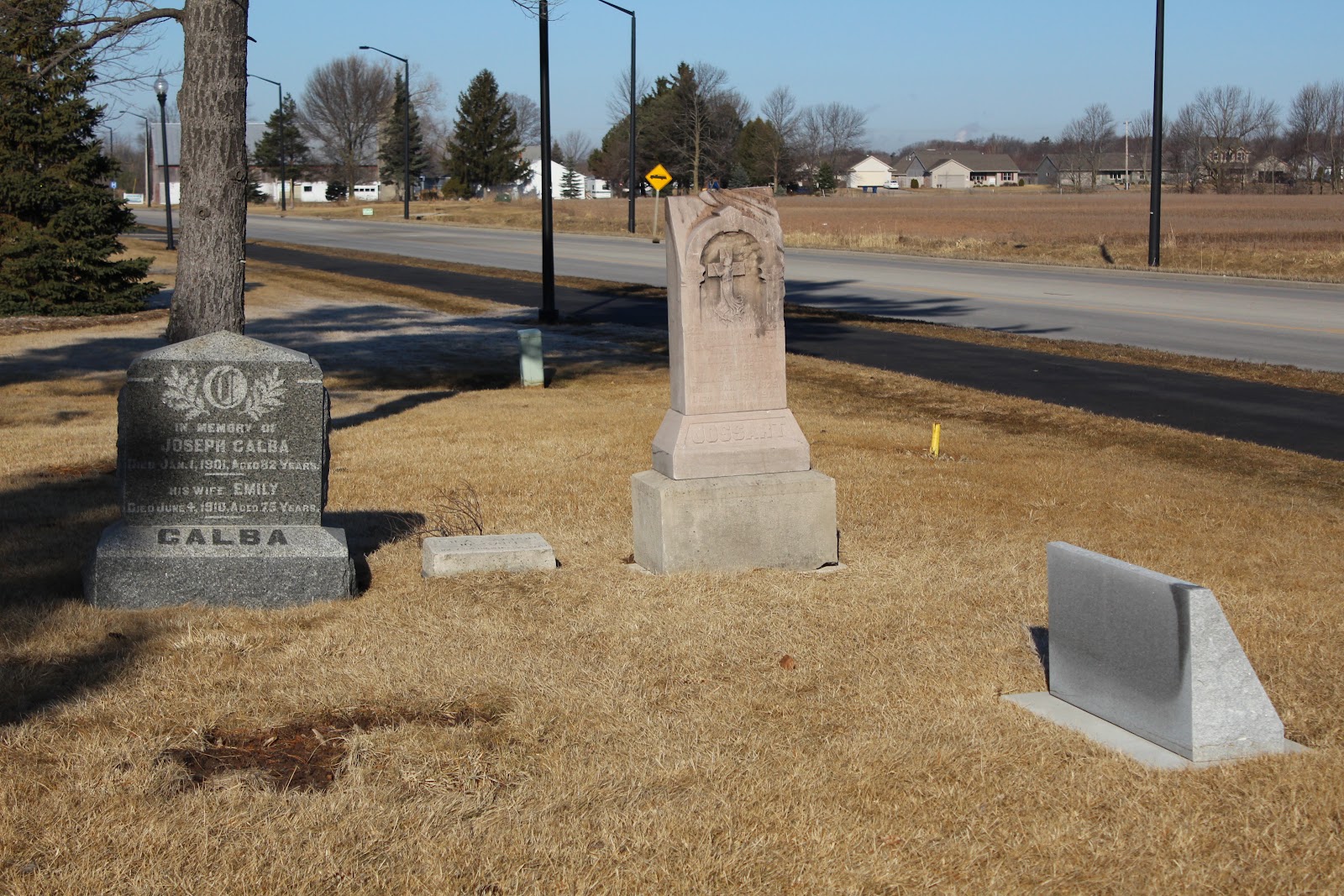 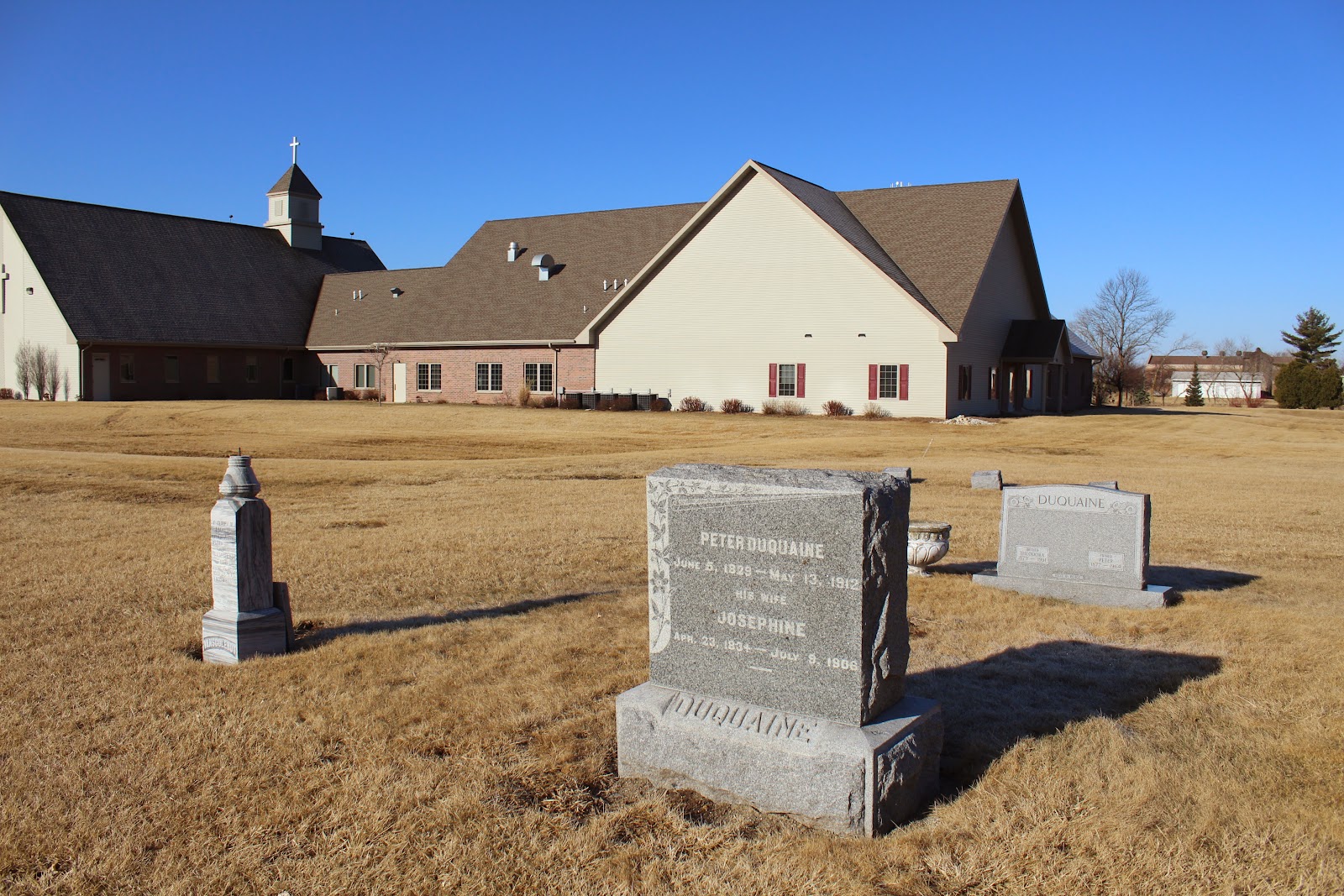 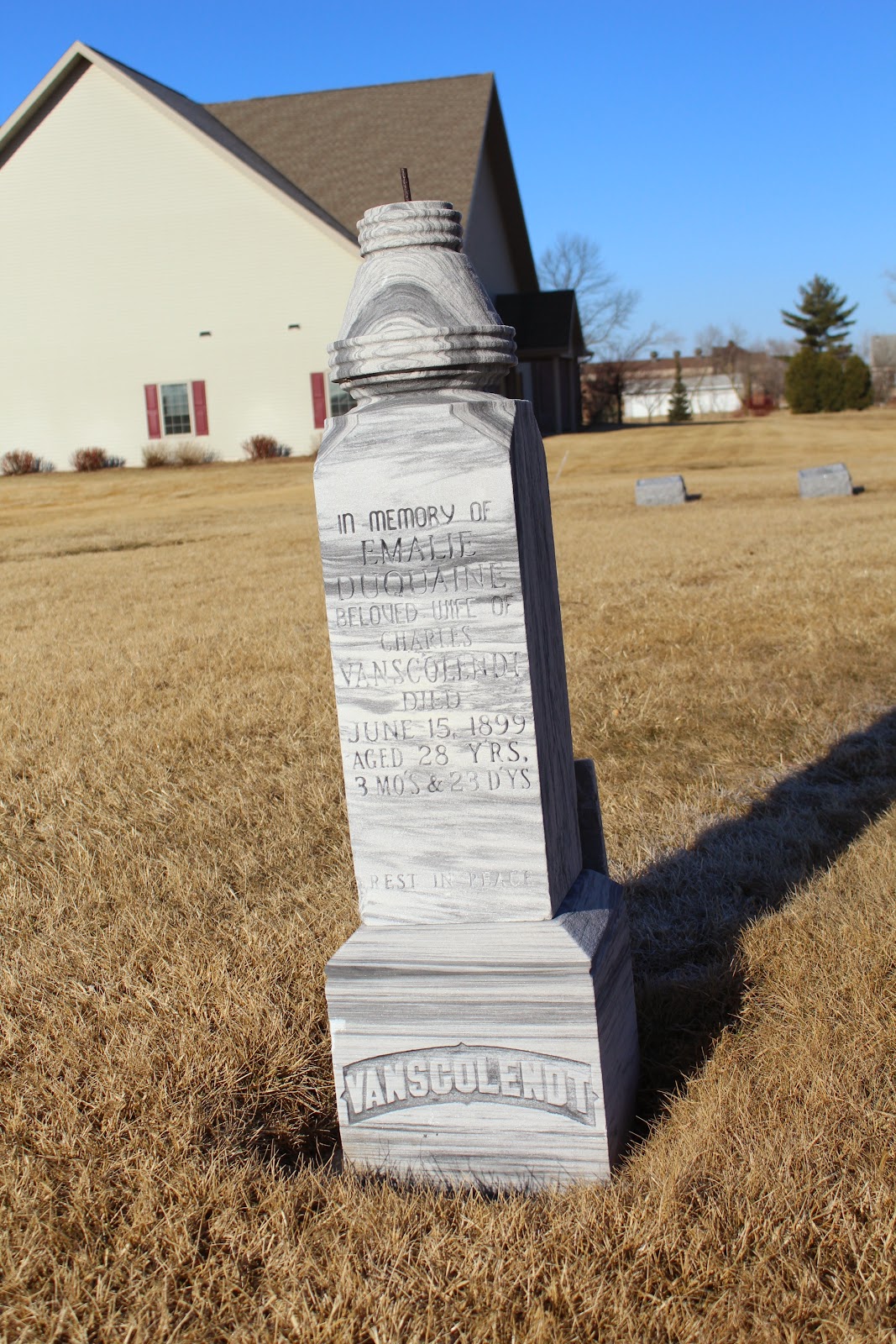 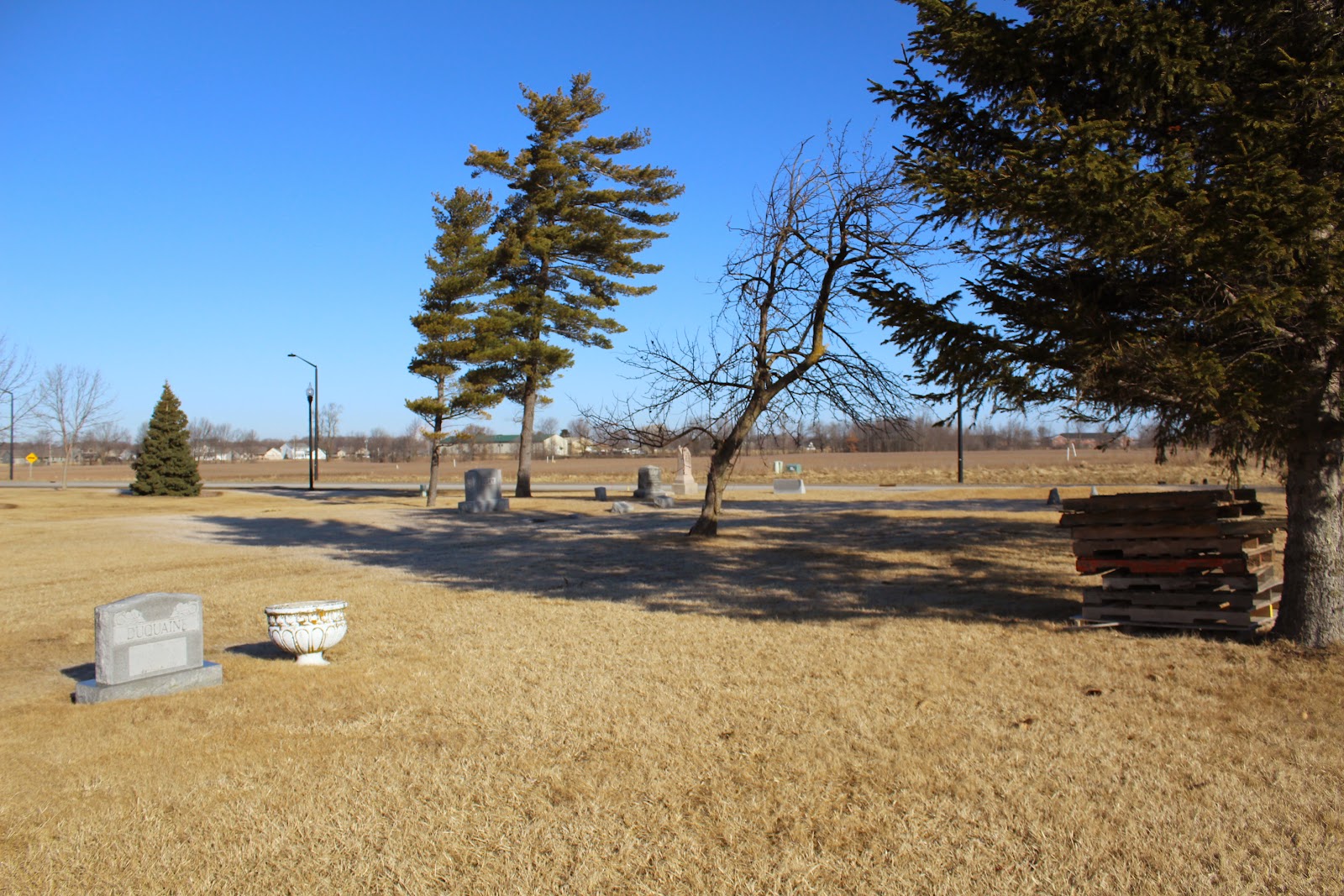 Looking north from the Duquaine headstones. 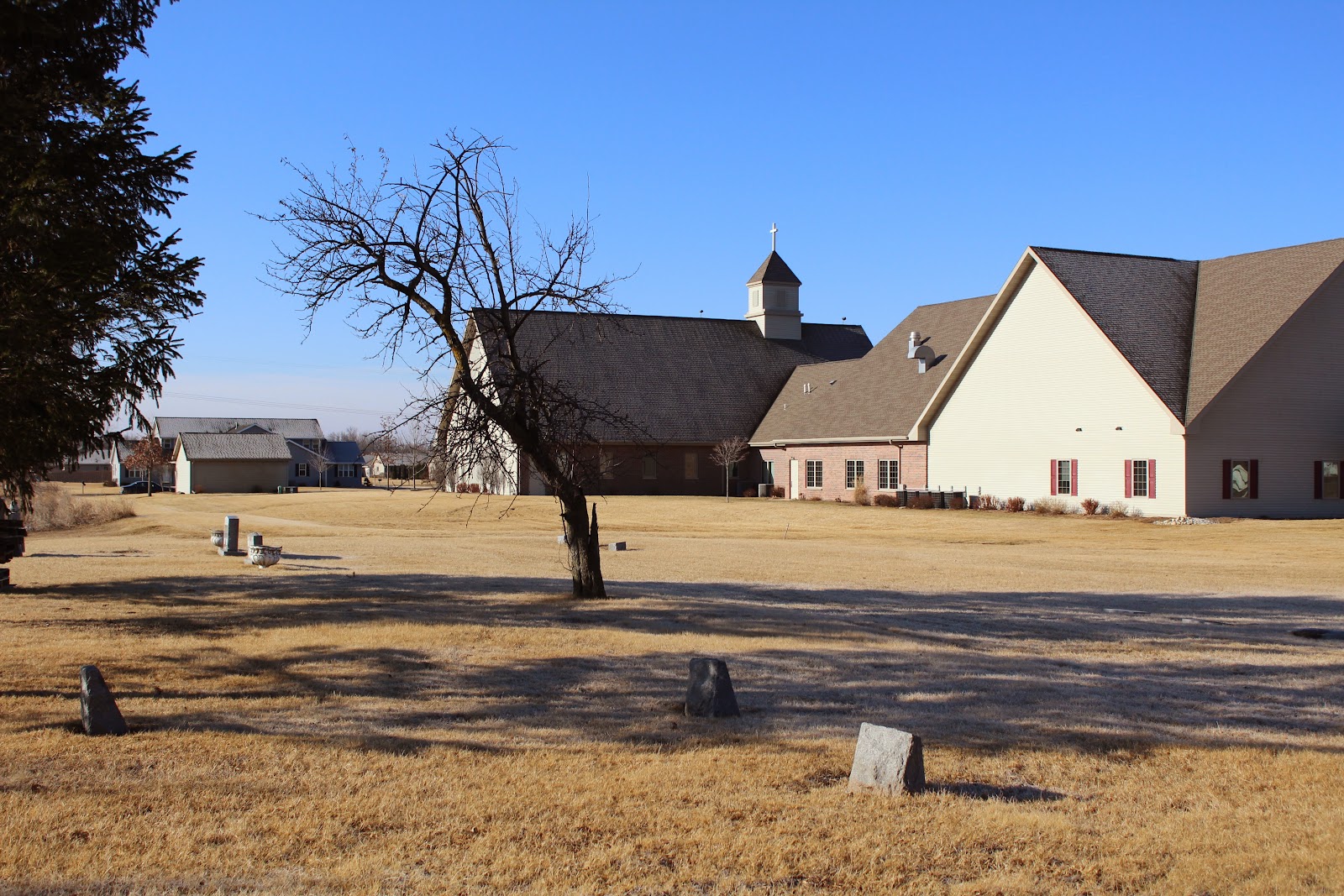 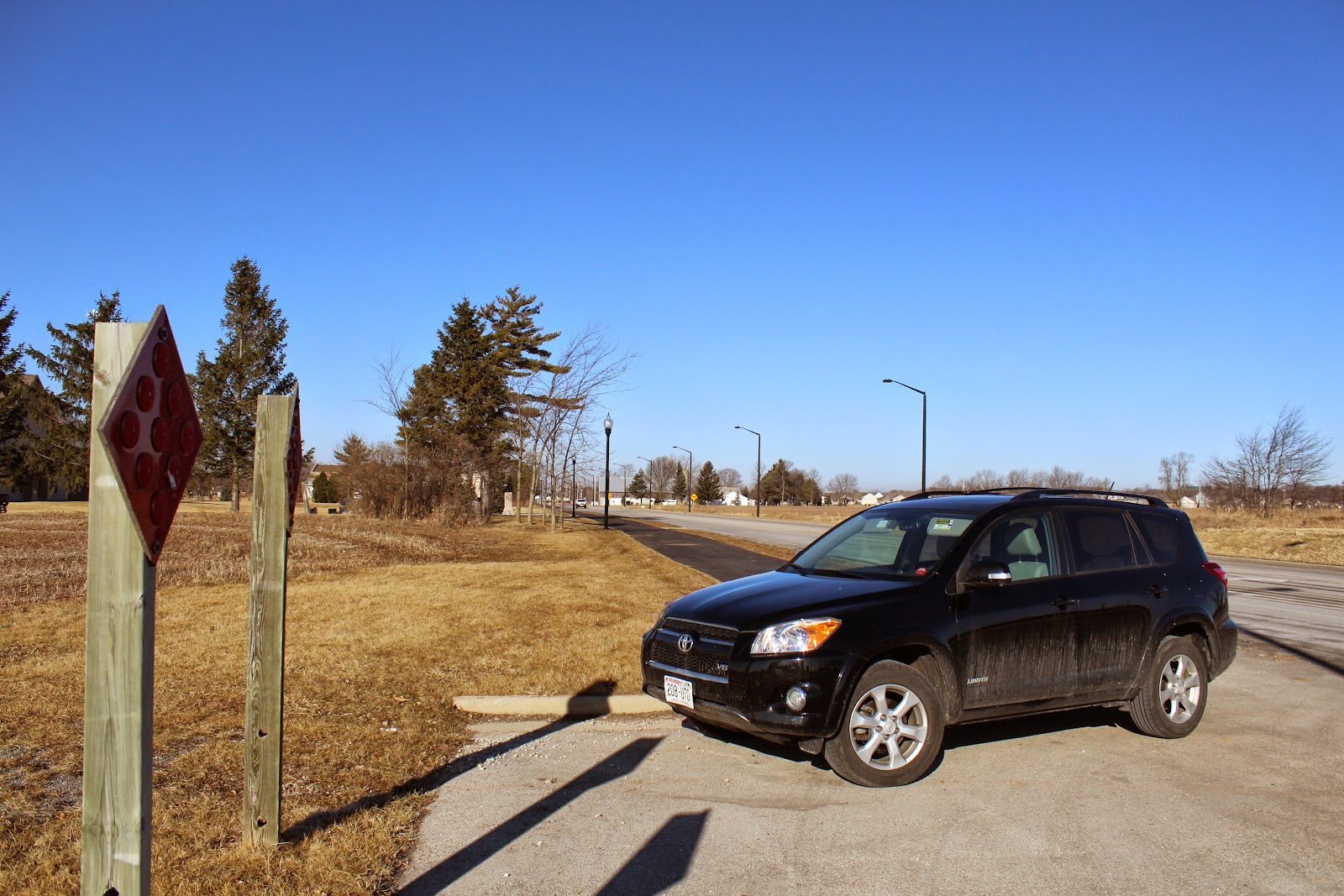 There is no parking at the marker location;
park at this pullout about 100 yards east of the marker. 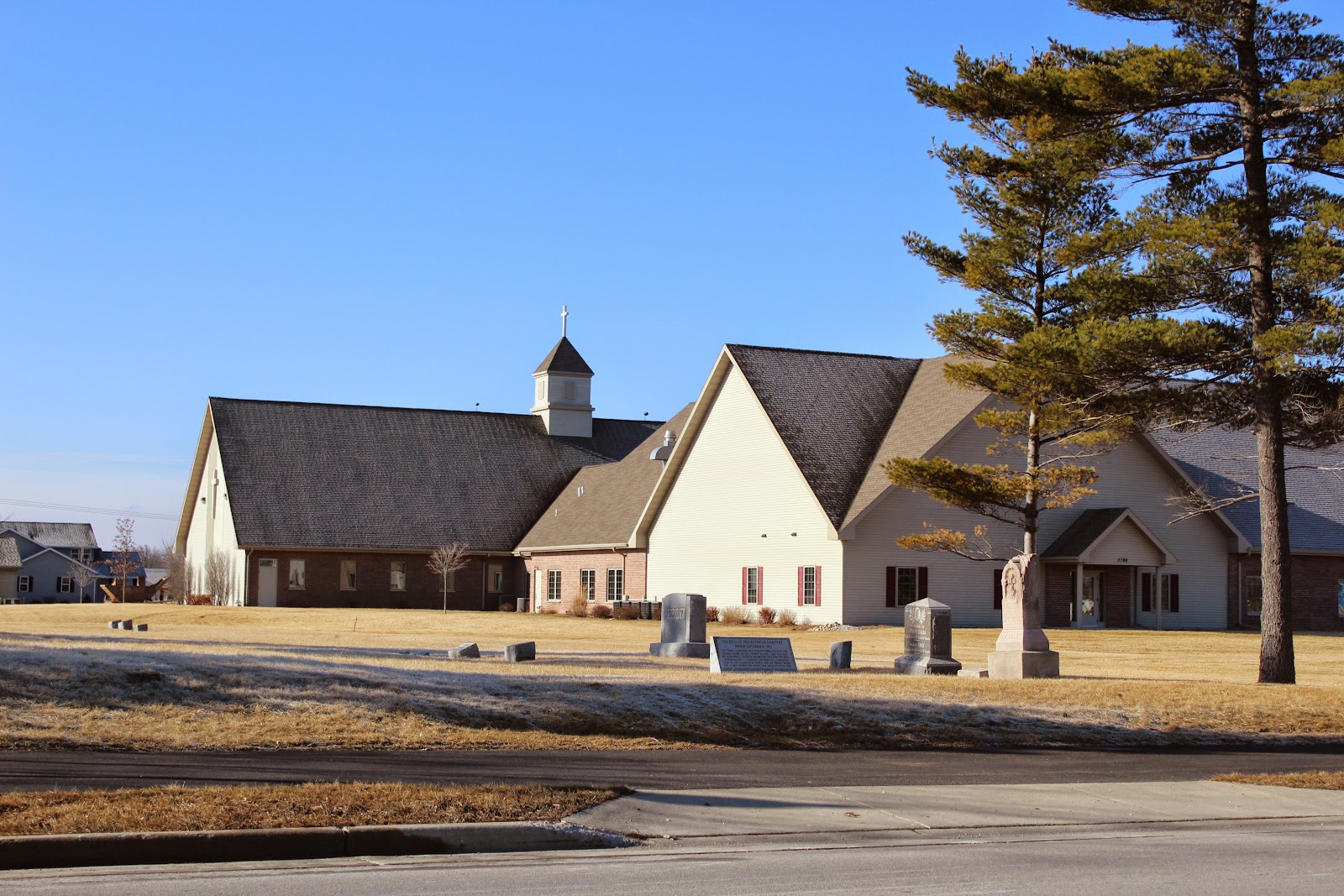 Looking south from across Eaton Road.