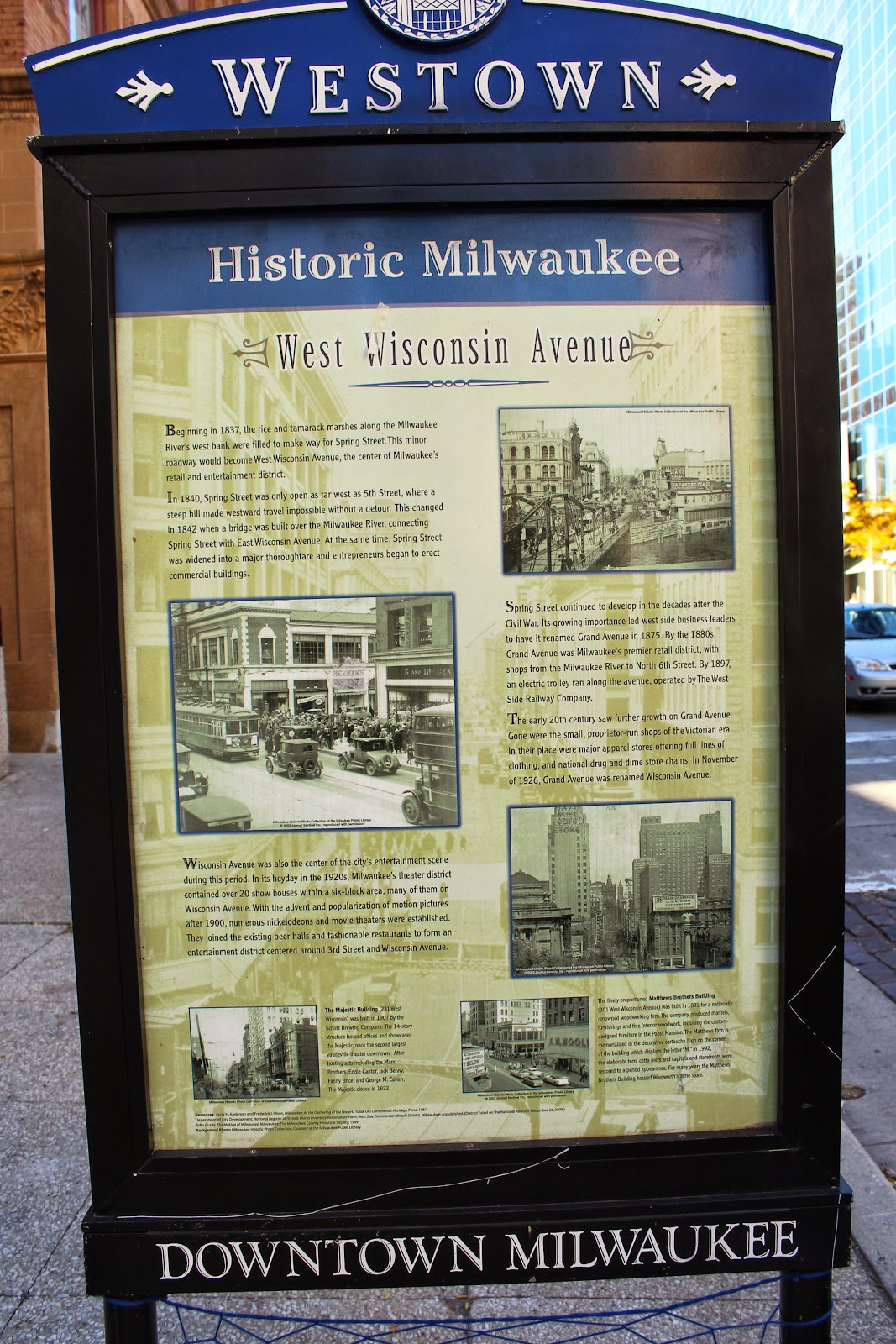 Beginning in 1837, the rice and tamarack marshes along the Milwaukee River's west bank were filled to make way for Spring Street. This minor roadway would become West Wisconsin Avenue, the center of Milwaukee's retain and entertainment district.

In 1840, Spring Street was only open as far west as 5th Street, where a steep hill make westward travel impossible without a detour. This changed in 1842 when a bridge was built over the Milwaukee River, connecting Spring Street with East Wisconsin Avenue. At the same time, Spring Street was widened into a major thoroughfare and entrepreneurs began to erect commercial buildings.

Wisconsin Avenue was also the center of the city's entertainment scene during this period. In its heyday in the 1920s, Milwaukee's theater district contained over 20 show houses within a six-block area, many of them on Wisconsin Avenue. With the advent and popularization of motion pictures after 1900, numerous nickelodeons and movie theaters were established. They joined the existing beer halls and fashionable restaurants to form an entertainment district centered around 3rd Street and Wisconsin Avenue.

Spring Street continue to develop in the decades after the Civil War. Its growing importance led west side business leaders to have it renamed Grand Avenue in 1875. By the 1880s, Grand Avenue was Milwaukee's premier retain district, with shops from the Milwaukee River to North 6th Street. By 1897, an electric trolley ran along the avenue, operated by The West Side Railway Company.

The early 20th century saw further growth on Grand Avenue. Gone were the small, proprietor-run shops of the Victorian era. In their place were major apparel stores offering full lines of clothing, and national drug and dime store chains. In November of 1926, Grand Avenue was renamed Wisconsin Avenue. 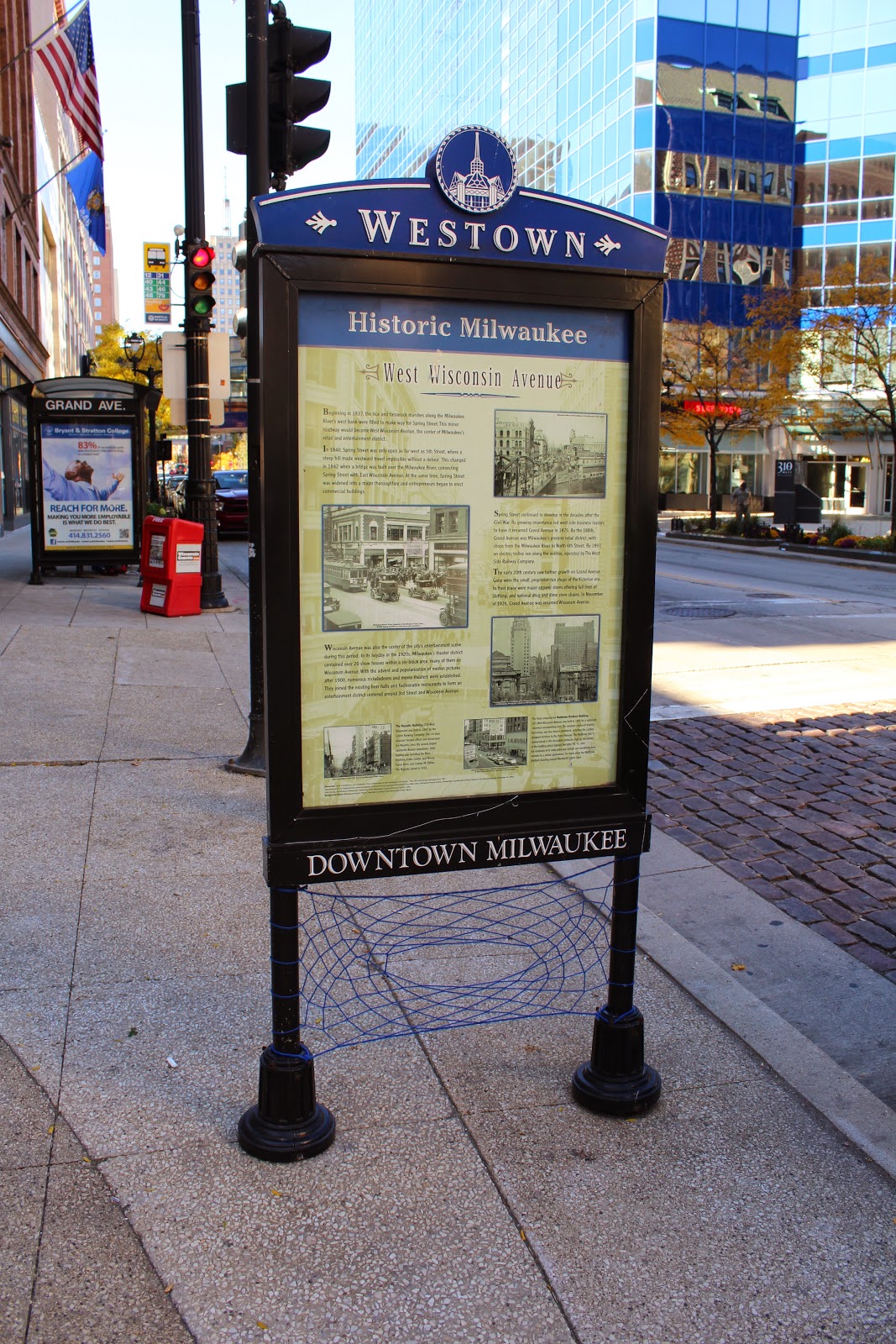 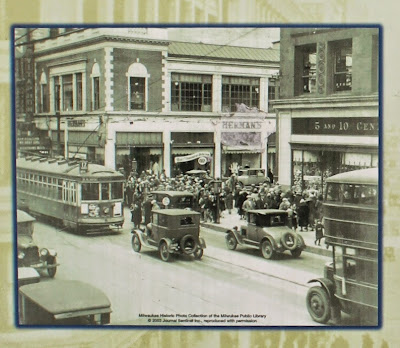 The Majestic Building (231 West Wisconsin) was built in 1907 by the Schlitz Brewing Company. The 14-story structure houses offices and showcased the Majestic, once the second largest vaudeville theater downtown. After hosting acts including the Marx Brothers, Eddie Cantor, Jack Benny, Fanny Brice, and George M. Cohan, the Majestic closed in 1932. 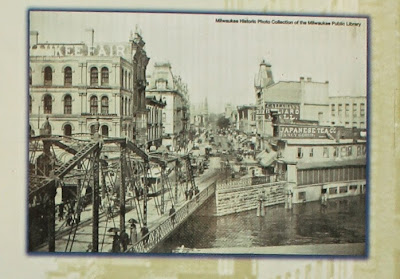 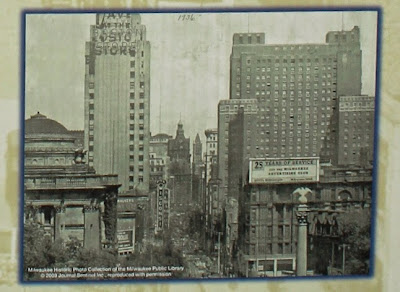 The finely proportioned Matthews Brothers Building (391 West Wisconsin Avenue) was built in 1891 for a nationally renowned woodworking firm. The company produced mantels, furnishings and fine interior woodwork, including the custom-designed furniture in the Pabst Mansion. The Matthews firm is memorialized in the decorative cartouche high on the corner of the building which displays the letter "M". In 1992, the elaborate terra cotta piers and capitals and storefronts were restored to a period appearance. For many years the Matthews Brothers Building housed Woolworth's dine store. 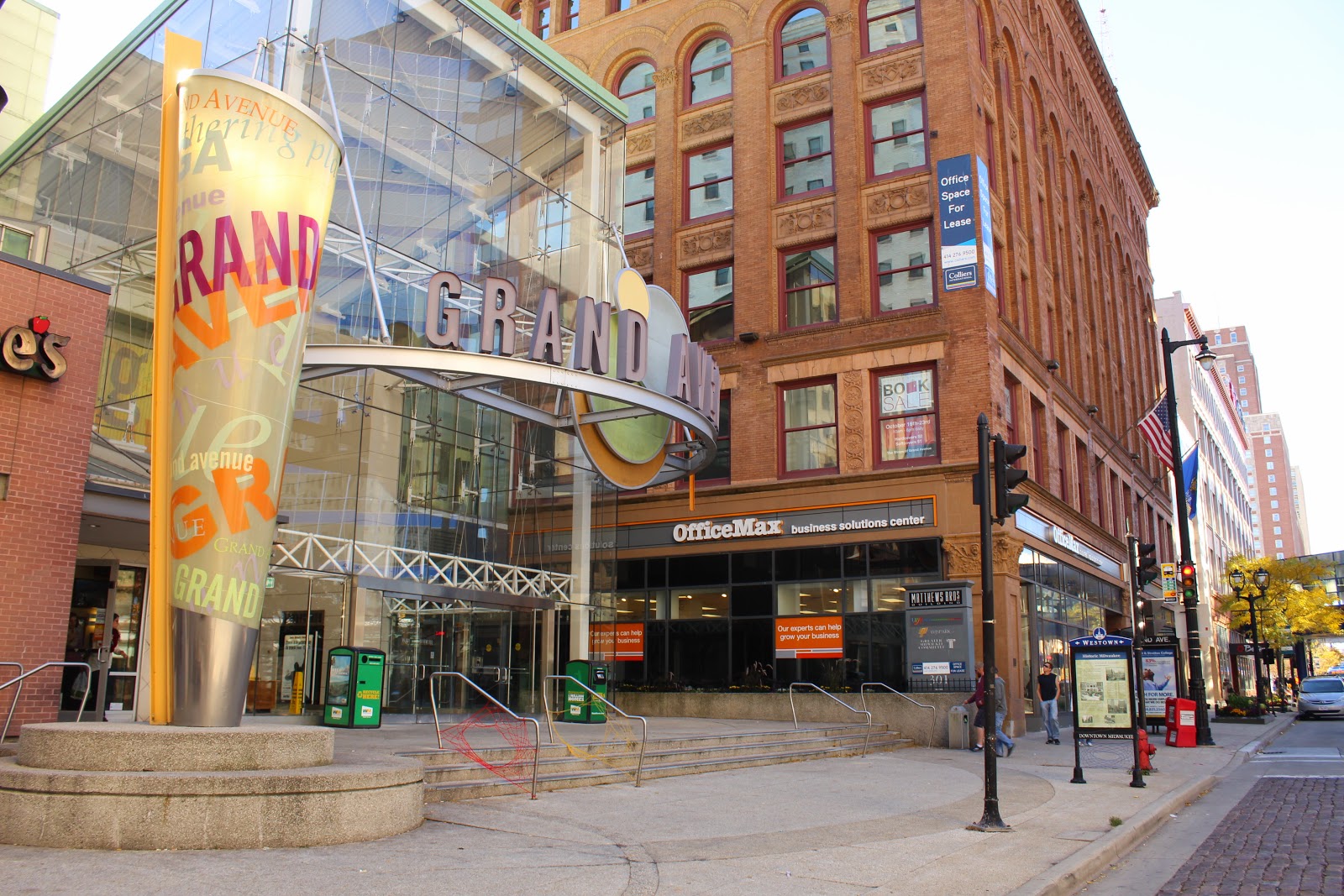 The marker is at the entrance to Grand Avenue;
the marker is visible to the far right, along the street.