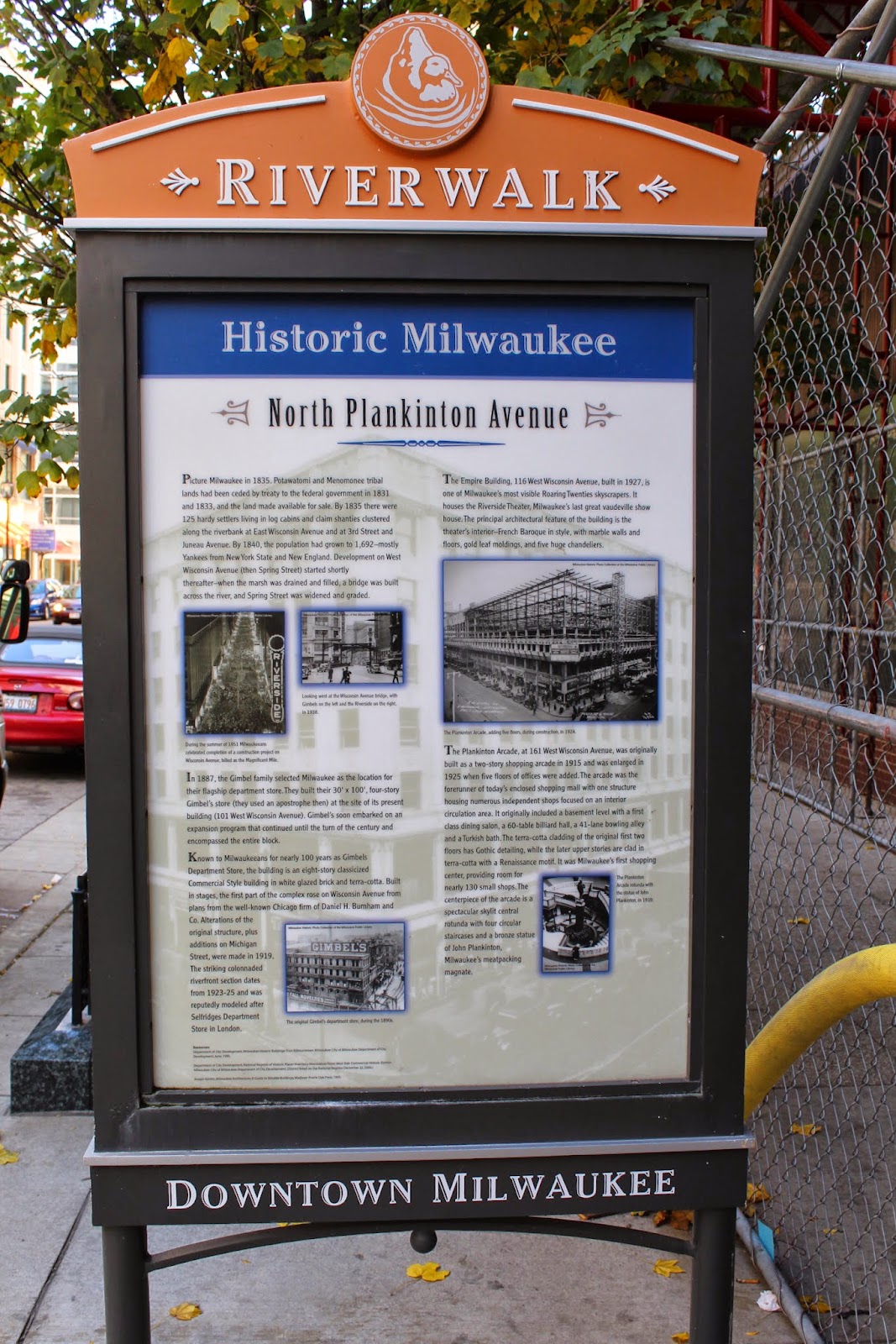 Picture Milwaukee in 1835. Potawatomi and Menomonee tribal lands had been ceded by treaty to the federal government in 1831 and 1833, and the land made available for sale. By 1835 there were 125 hardy settlers living in log cabins and claim shanties clustered along the riverbank at East Wisconsin Avenue and at 3rd Street and Juneau Avenue. By 1840, the population had grown to 1,692—mostly Yankees from New York State and New England. Development on West Wisconsin Avenue (then Spring Street) started shortly thereafter—when the marsh was drained and filled, a bridge was built across the river, and Spring Street was widened and graded.

In 1887, the Gimbel family selected Milwaukee as the location for their flagship department store. They built their 30’ x 100’, four-story Gimbel’s store (they used an apostrophe then) at the site of its present building (101 West Wisconsin Avenue). Gimbel’s soon embarked on an expansion program that continued until the turn of the century and encompassed the entire block.

Know to Milwaukeeans for near 100 years as Gimbels Department Store, the building is an eight-story classicized Commercial Style building in white glazed brick and terra-cotta. Built in stages, the first part of the complex rose on Wisconsin Avenue from plans from the well-known Chicago firm of Daniel H. Burnham and Co. Alterations of the original structure, plus additions on Michigan Street, were made in 1919. The striking colonnaded riverfront section dates from 1923-25 and was reputedly modeled after Selfridges Department Store in London.

The Empire Building, 116 West Wisconsin Avenue, built in 1927, is one of Milwaukee’s most visible Roaring Twenties skyscrapers. It houses the Riverside Theater, Milwaukee’s last great vaudeville show house. The principal architectural feature of the building is the theater’s interior—French Baroque in style, with marble walls and floors, gold leaf moldings, and five huge chandeliers.

The Plankinton Arcade, at 161 West Wisconsin Avenue, was originally built as a two-story shopping arcade in 1915 and was enlarged in 1925 when five floors of offices were added. The arcade was the forerunner of today’s enclosed shopping mall with one structure housing numerous independent shops focused on an interior circulation area. It originally included a basement level with a first class dining salon, a 60-table billiard hall, a 41-lane bowling alley and a Turkish bath. The terra-cotta cladding of the original first two floors has Gothic detailing, while the later upper stories are clad in terra-cotta with a Renaissance motif. It was Milwaukee’s first shopping center, providing room for nearly130 small shops. The centerpiece of the arcade is a spectacular skylit central rotunda with four circular staircases and a bronze statue of John Plankinton, Milwaukee’s meat packing magnate.

Razed in Milwaukee: The Empire Building and the Riverside

Use the "Historic Milwaukee" label below to view all markers in this series; there are many. 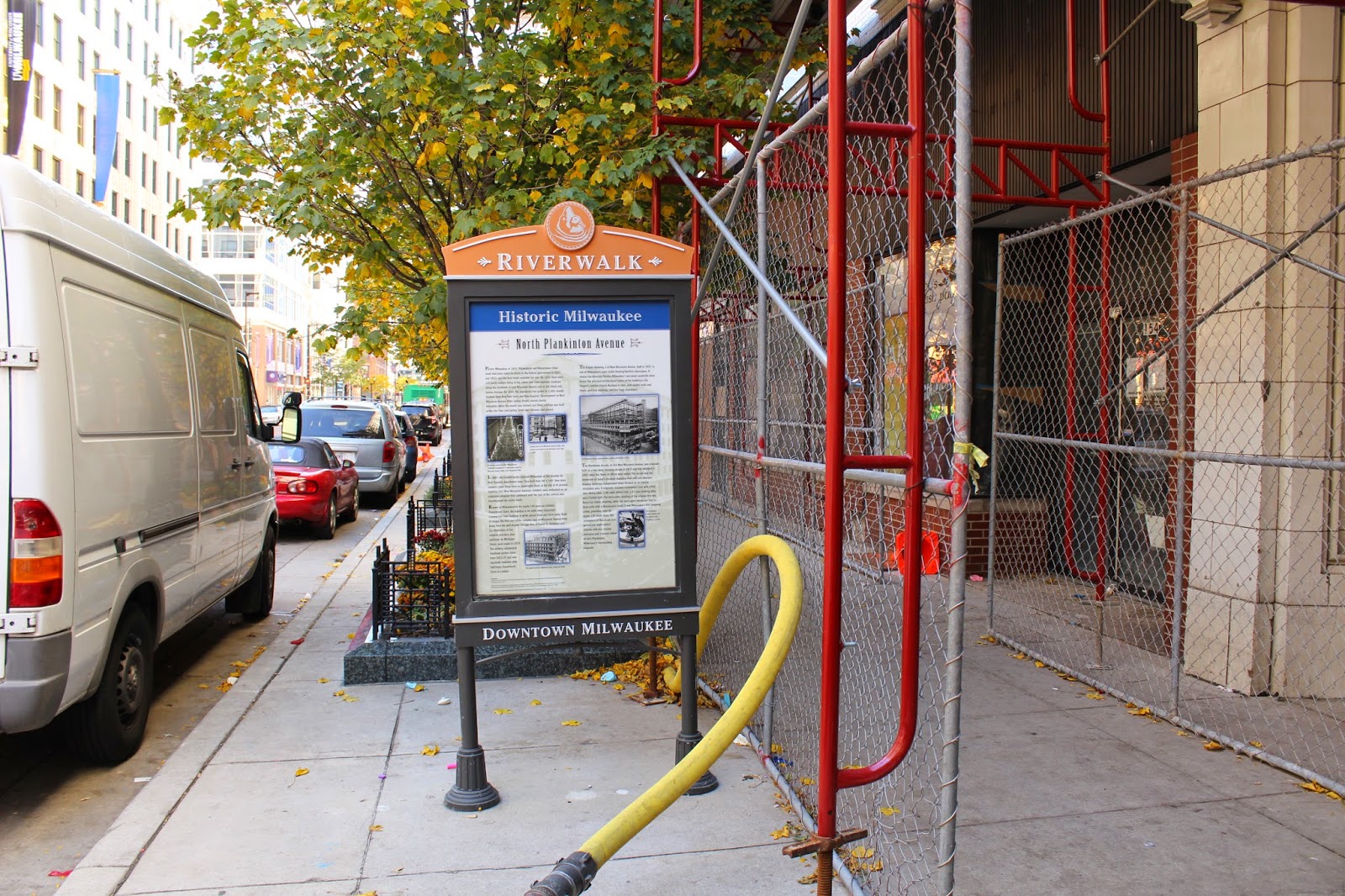 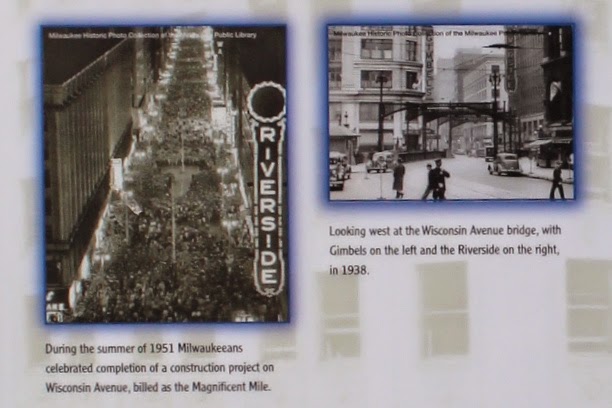 (Left) During the summer of 1951 Milwaukeeans celebrated completion of a construction project on Wisconsin Avenue, billed the Magnificent Mile.

(Right) Looking west at the Wisconsin Avenue bridge, with Gimbels on the left and the Riverside on the right, in 1938. 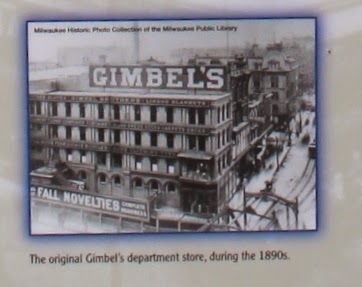 The original Gimbel's department store, during the 1890s. 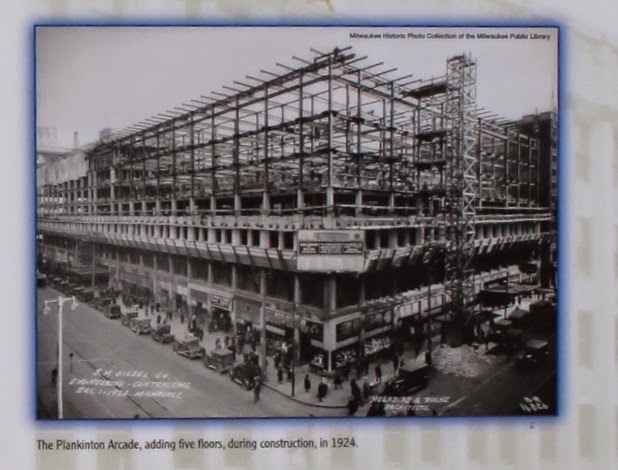 The Plankinton Arcade, adding five floors, during construction, in 1924. 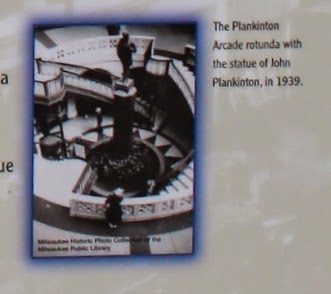 The Plankinton Arcade rotunda with the statue of John Plankinton, in 1939. 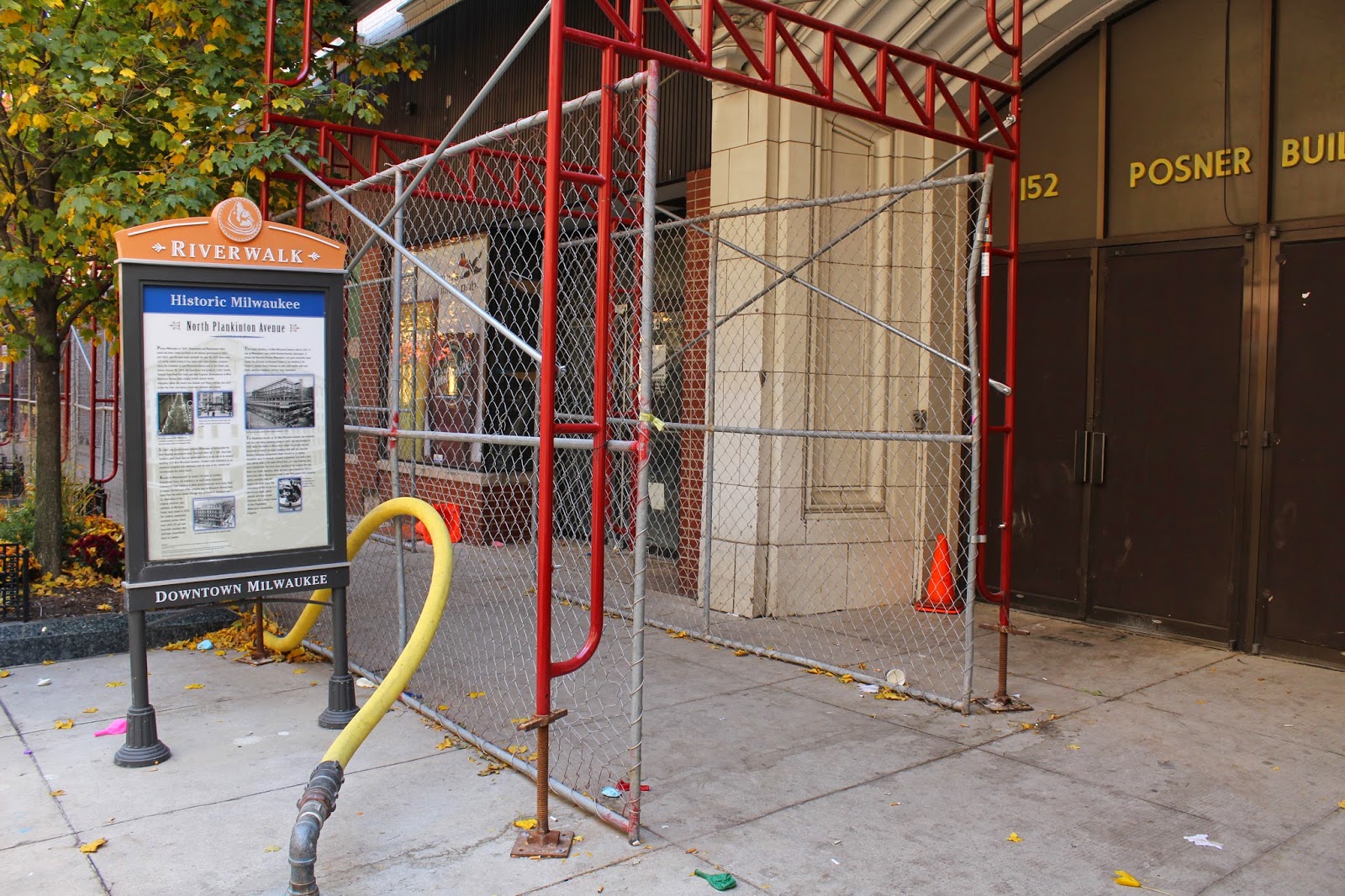 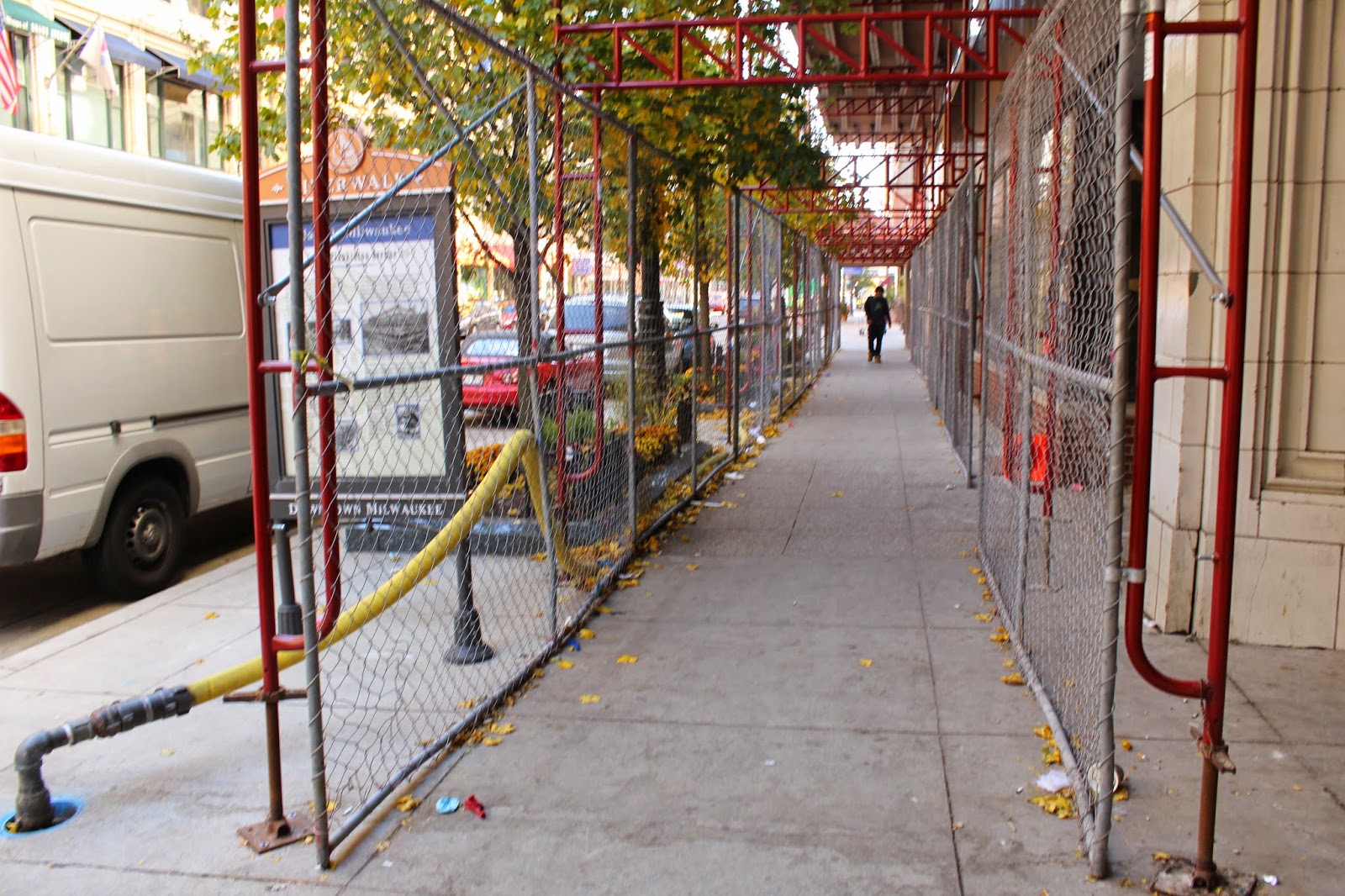 Even with all the construction, it was relatively easy to locate the marker.