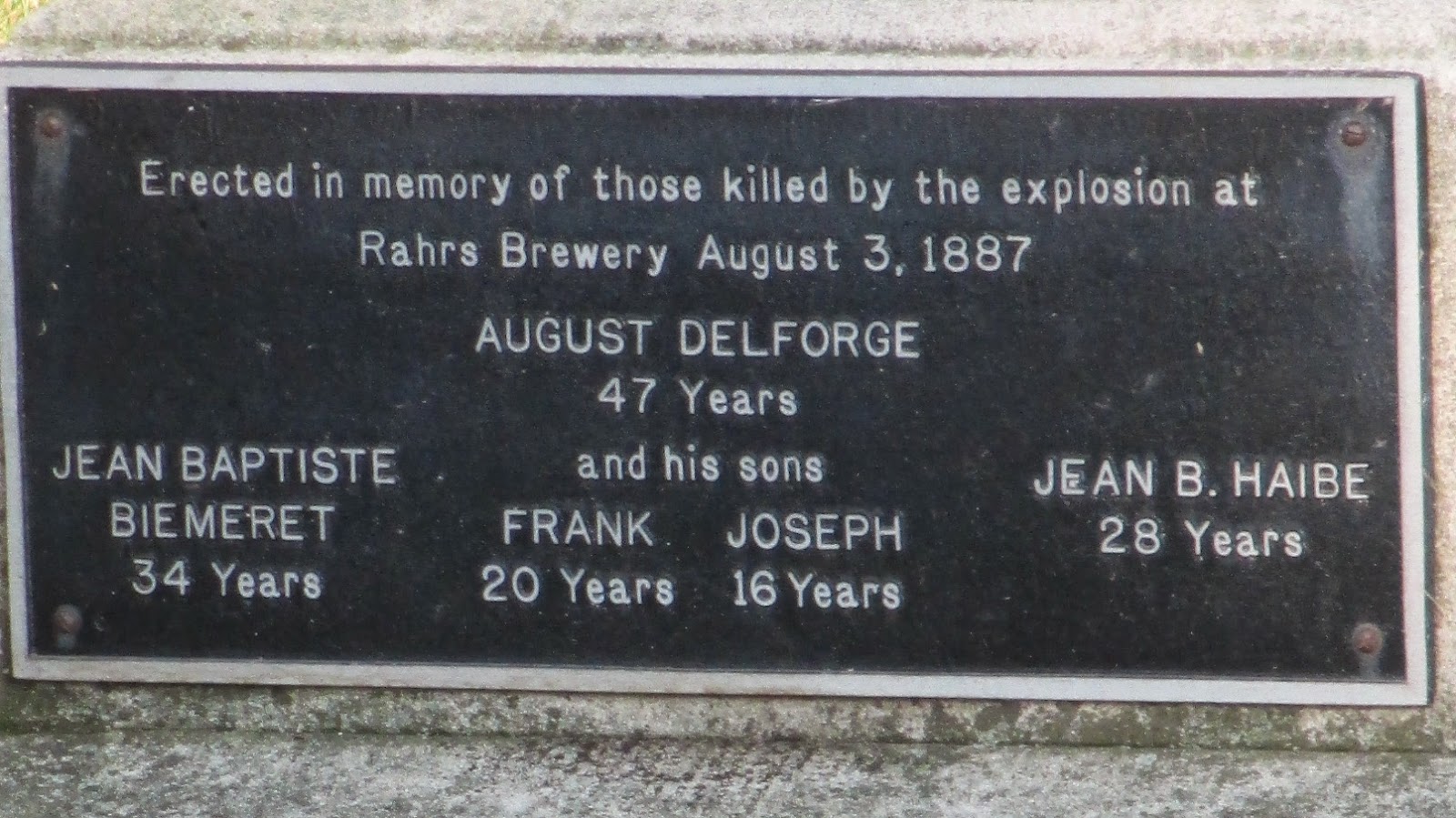 Erected in memory of those killed by the explosion at
Rahrs Brewery August 3, 1887


The memorial is located on the grounds of Allouez Catholic Cemetery, close to West Allouez Avenue at its intersection with Duchamie Street, Allouez, Wisconsin 54301.

On August 3, 1887 machinist August Delforge was working at the Rahr Brewery, along with his sons Frank and Joseph, and Jean B. Haibe, Jean Baptiste Biermeret and George Huber, when a newly installed boiler exploded, killing all six men. It remains one of the worst industrial accidents in Green Bay history. 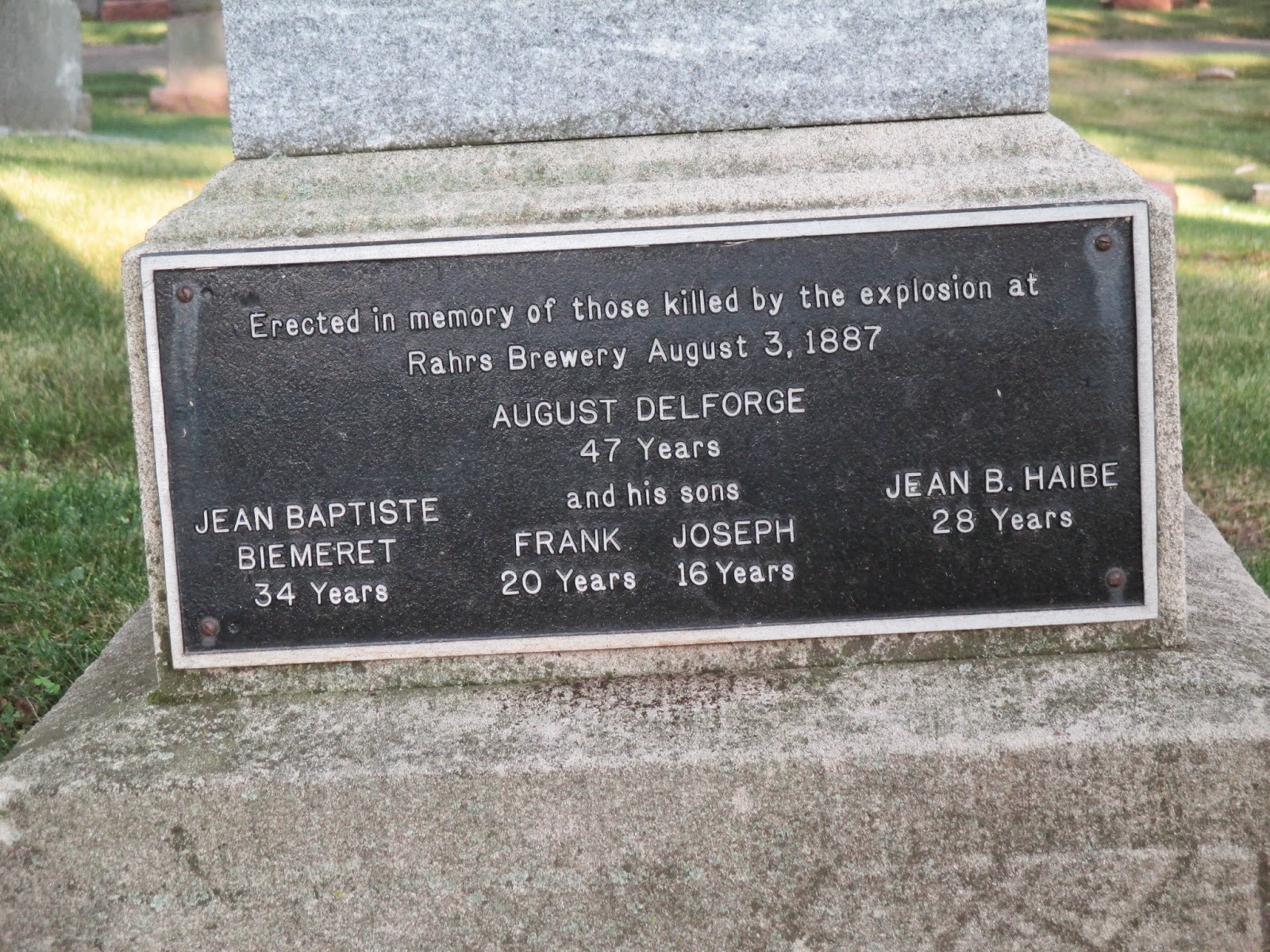 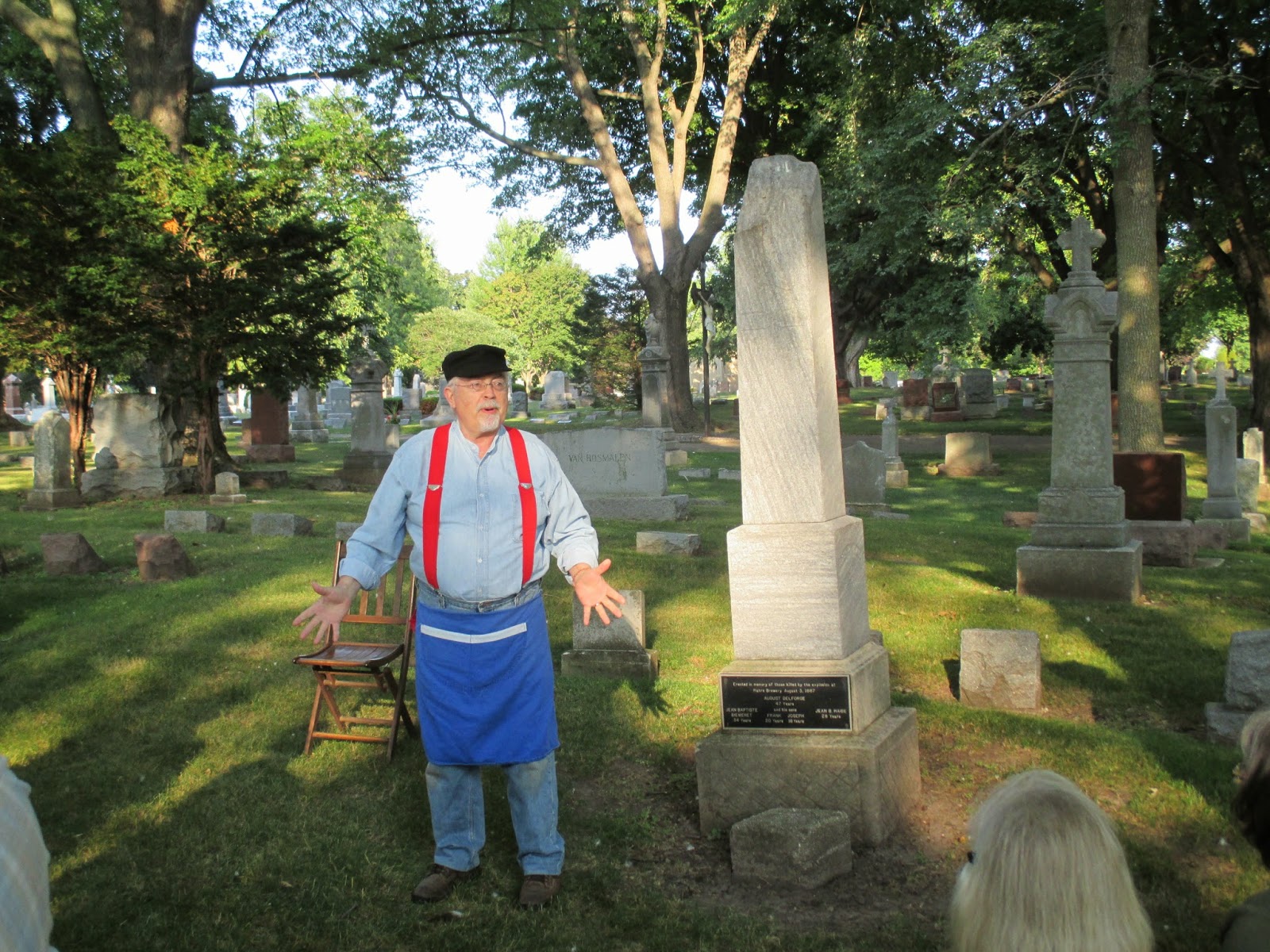 At the Brown County Historical Society "If Tombstones Could Talk" event
on August 6, 2014, at Allouez Catholic Cemetery,
August Delforge relates the tragic story of his horrific demise in the
1887 Rahrs Brewery explosion that killed him, his two young sons, and three co-workers,
all of whom were scalded to death. 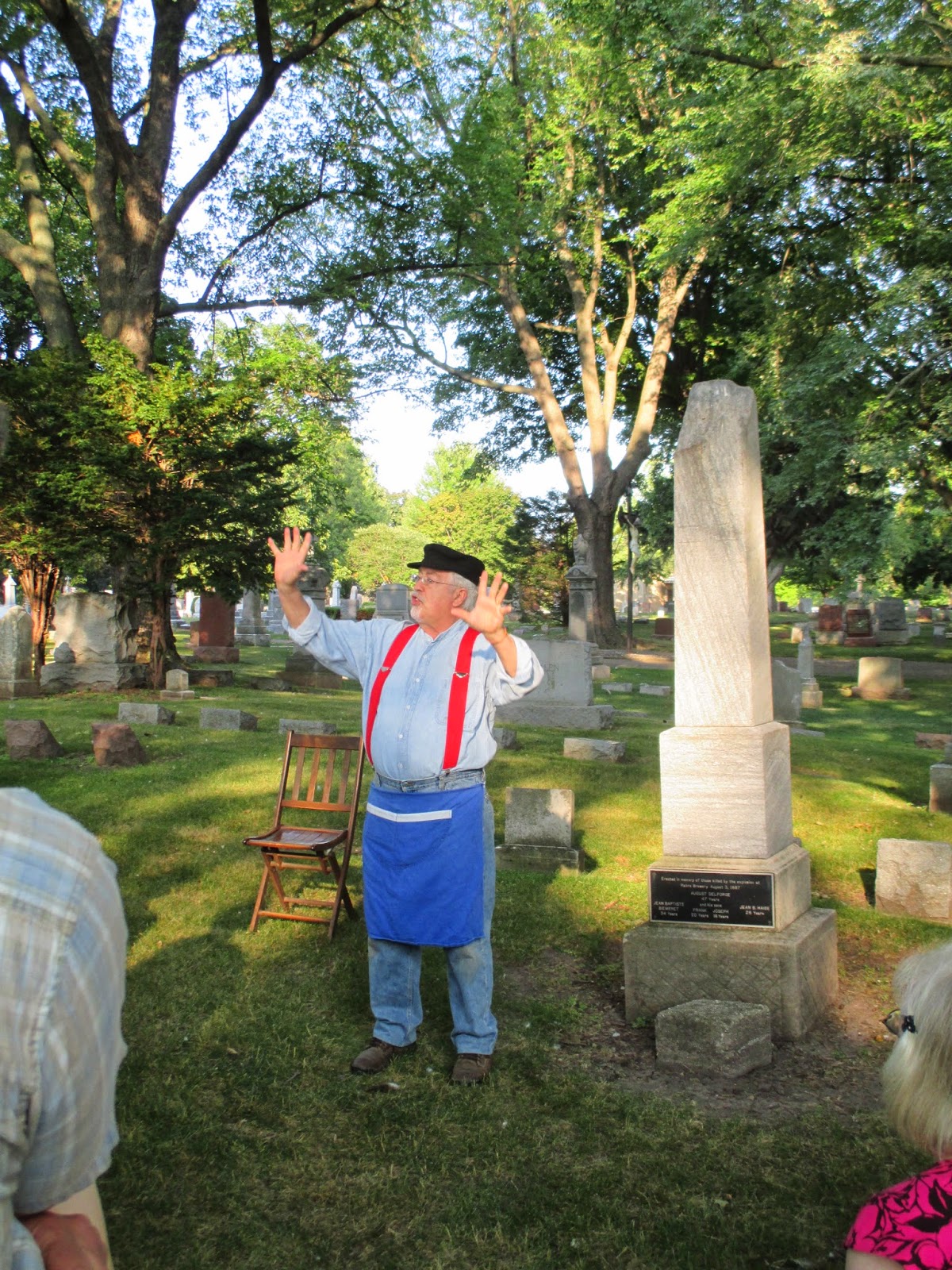 On the evening of August 3, 1887, August Delforge and five of his co-workers, including his two young sons, were putting the finishing touches on a new boiler system for the Henry Rahrs Brewery Company. The system included a giant copper kettle with the capacity to hold 100 barrels of water. A sheet iron steam boiler surrounded bottom and sides of the kettle. That night, the kettle was filled with 70 barrels of water, heated to boiling by the steam boiler system.

In addition to his sons Frank (20 years) and Joseph (16 years) (brought along to hold the lantern), August was assisted by George Huber (21 years) and Jean B. Haibe (28 years). Jean Baptiste Biemeret (34 years), who delivered beer for Rahrs, had just walked in when the copper kettle suddenly exploded.

Hear the whole story here (on YouTube), including how the entire community of Green Bay mourned the deaths of these six men. 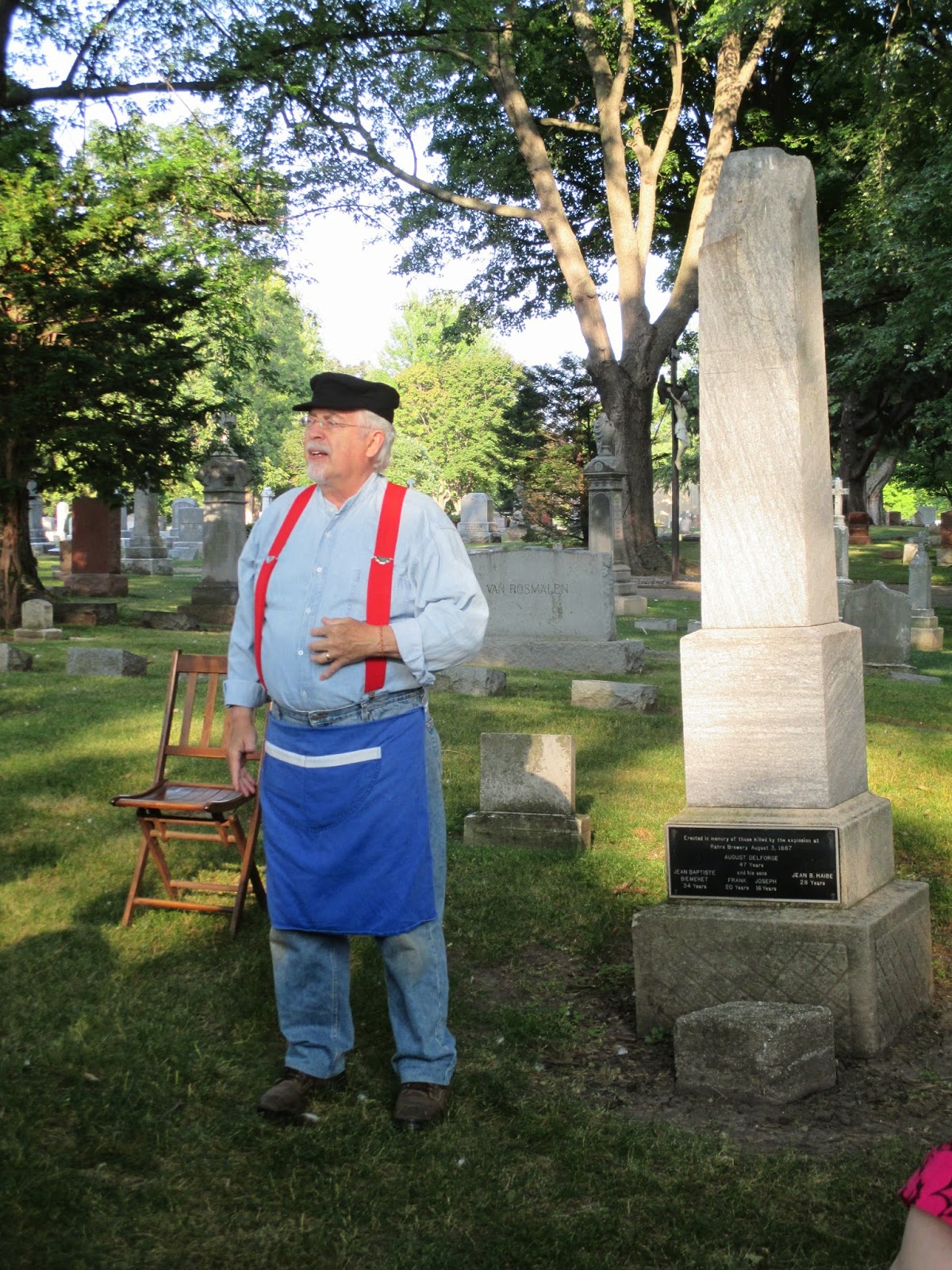 George Huber is buried in the family plot about 100 yards from the memorial.
The remaining five men are buried together in this mass grave,
"together in death, as we had been in life". 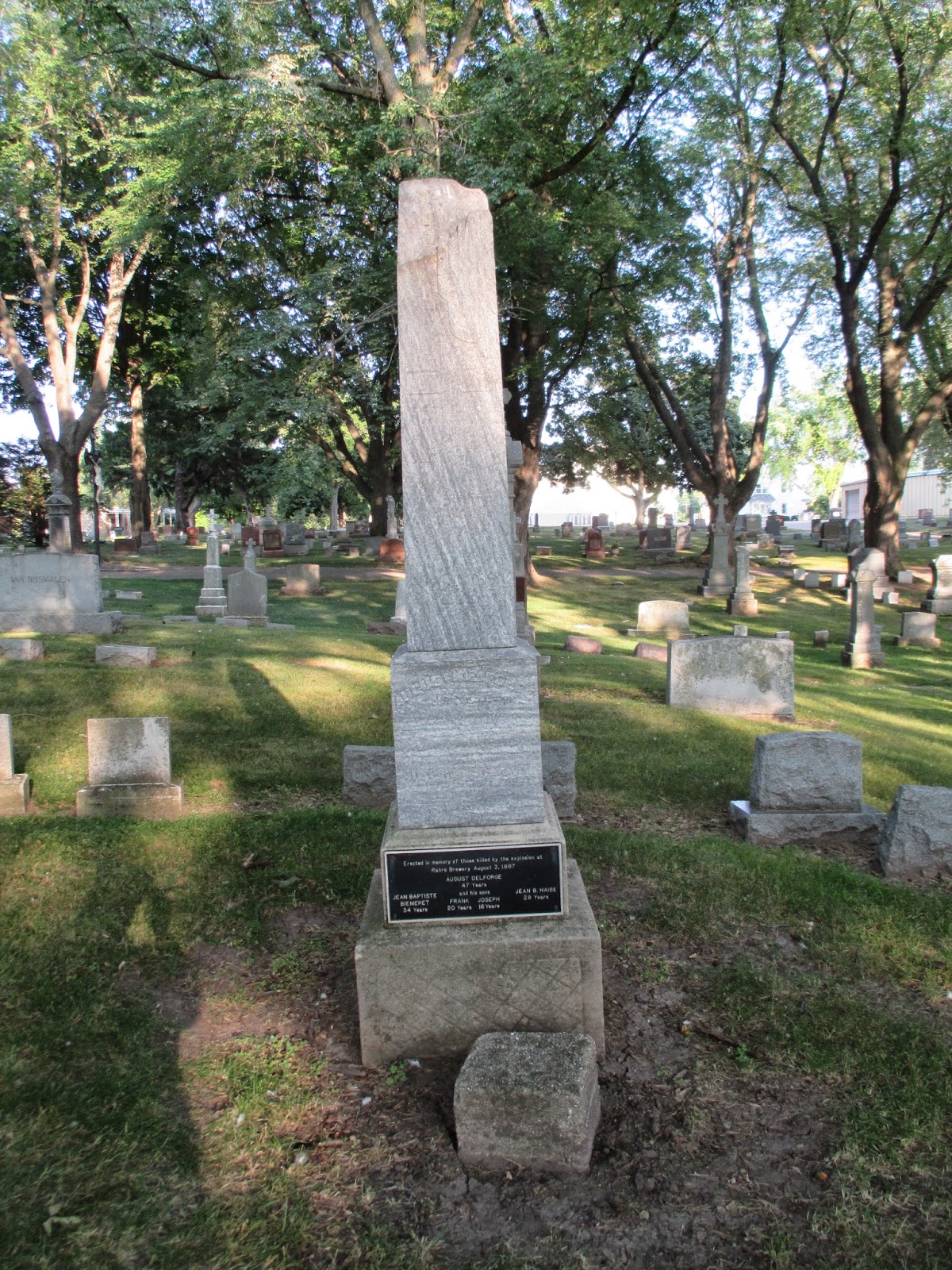 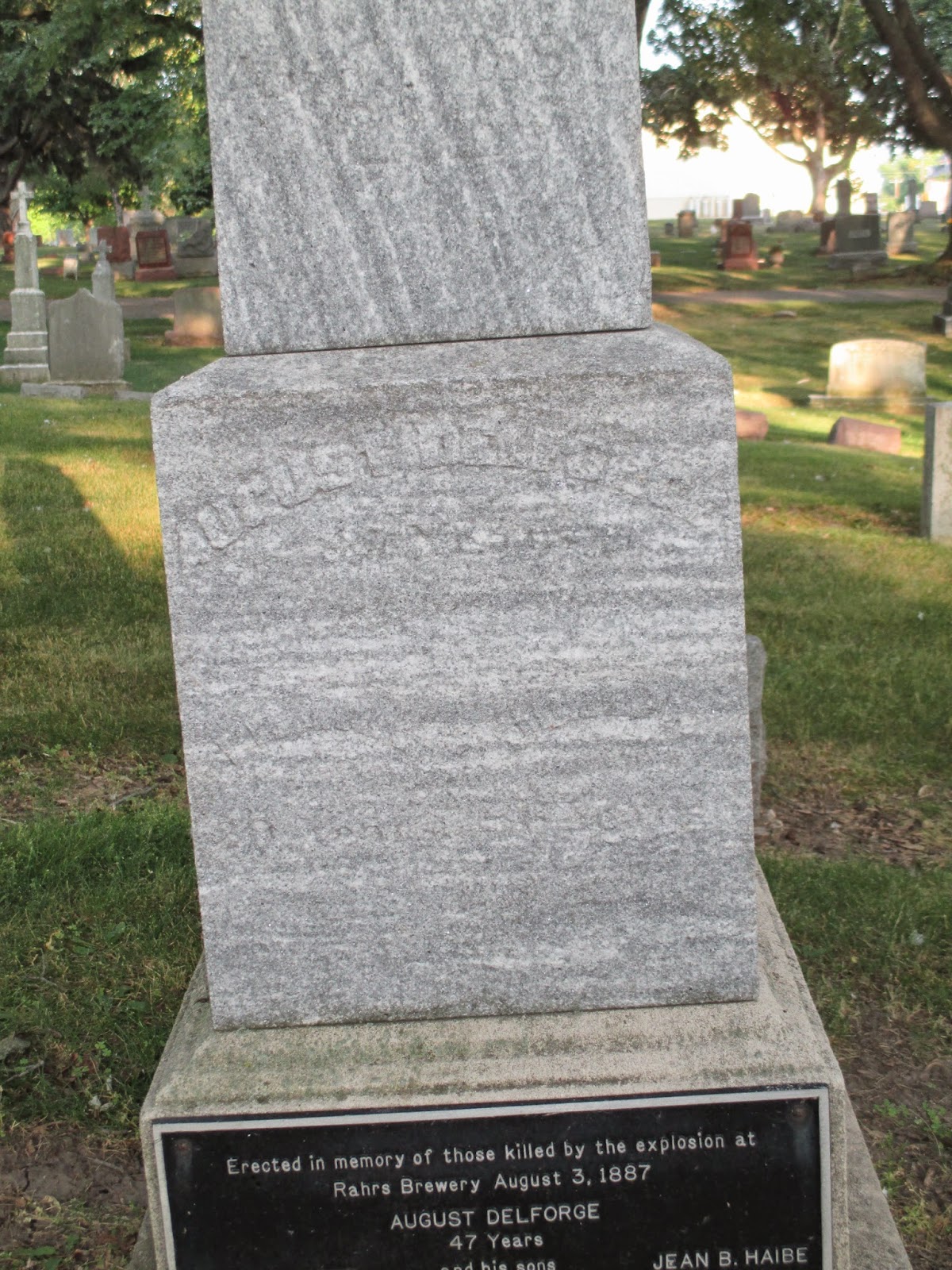 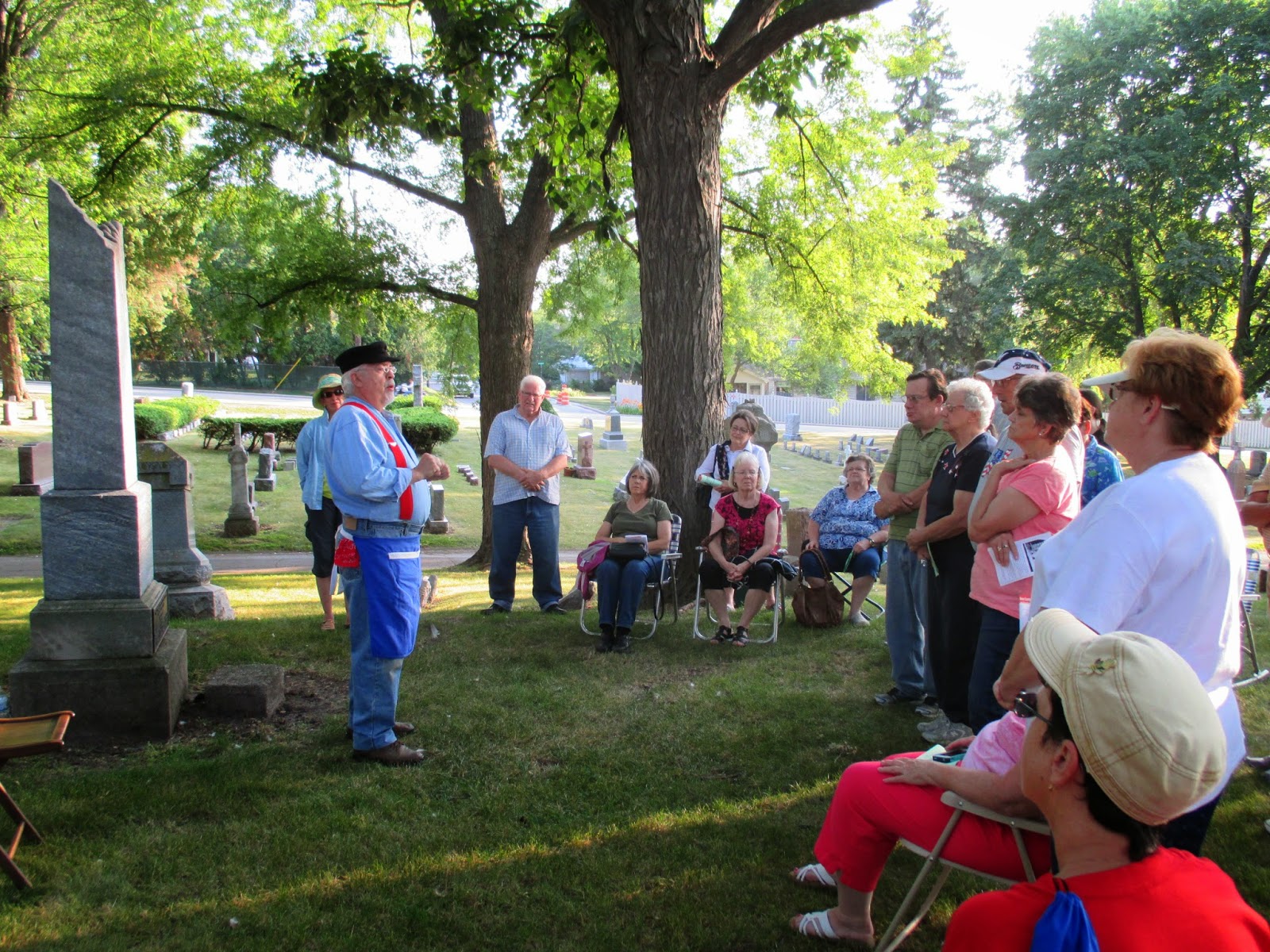 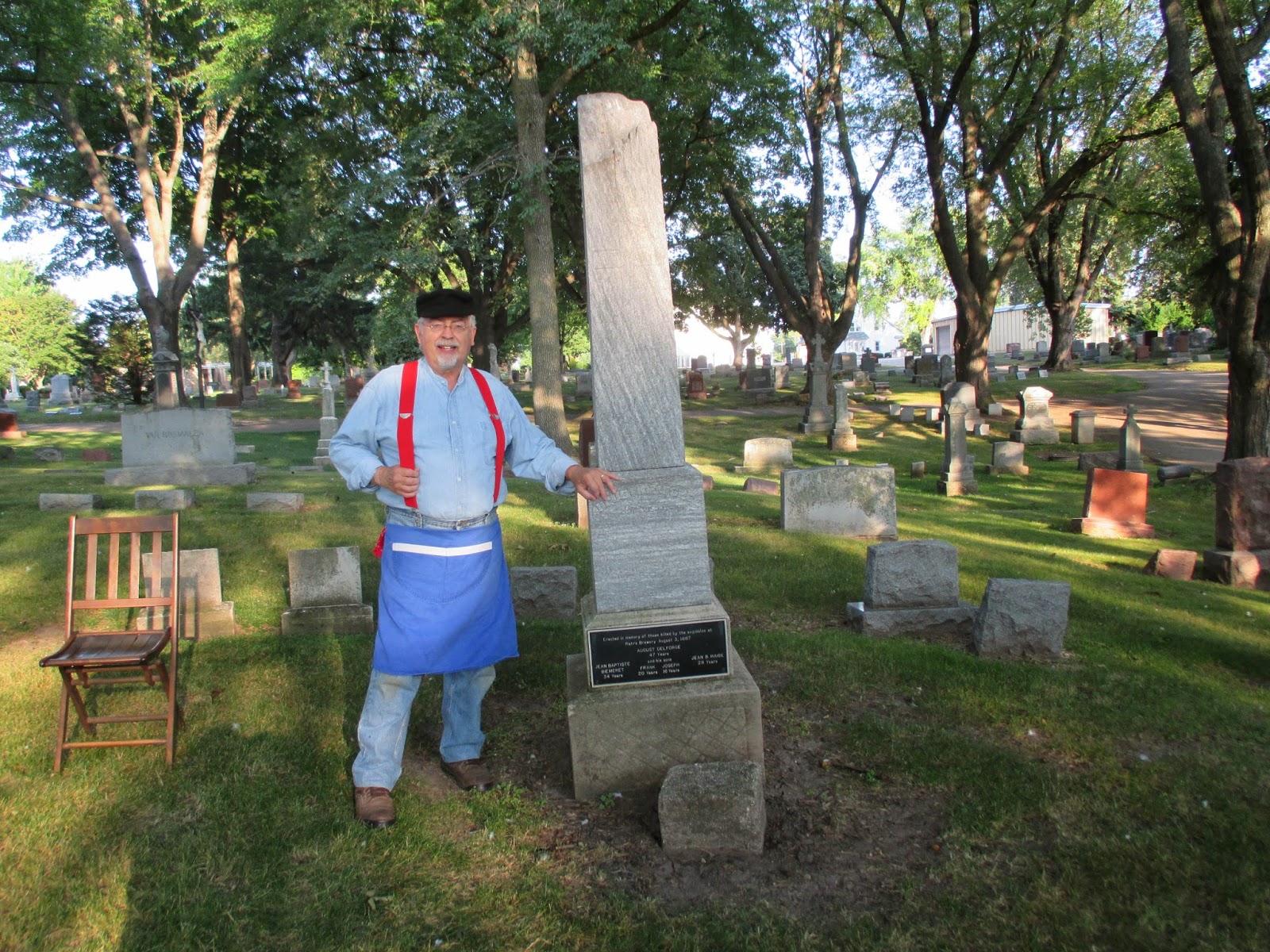 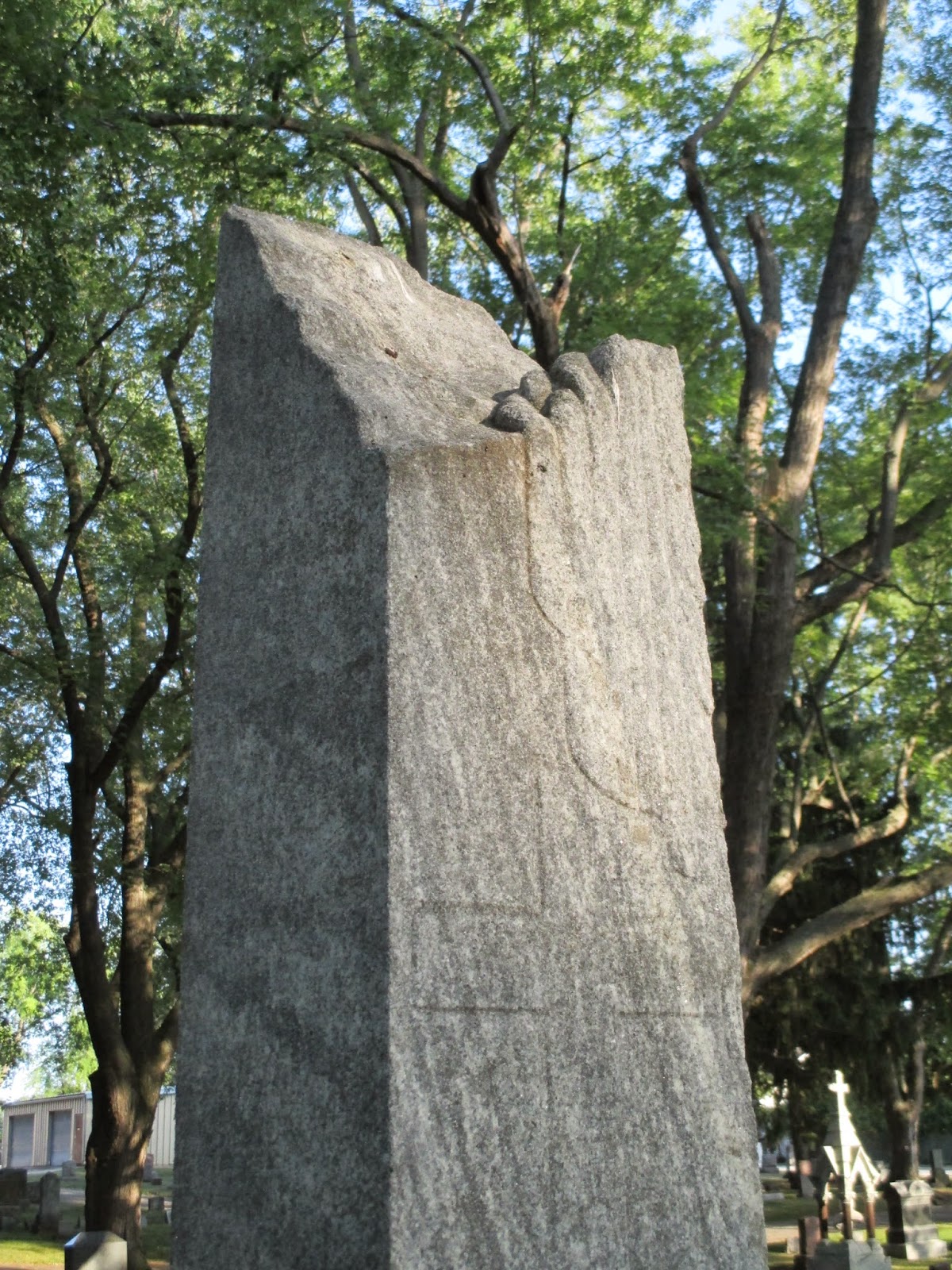 The obelisk is deliberately broken, to symbolize the lives broken
and destroyed much before their time by the explosion.