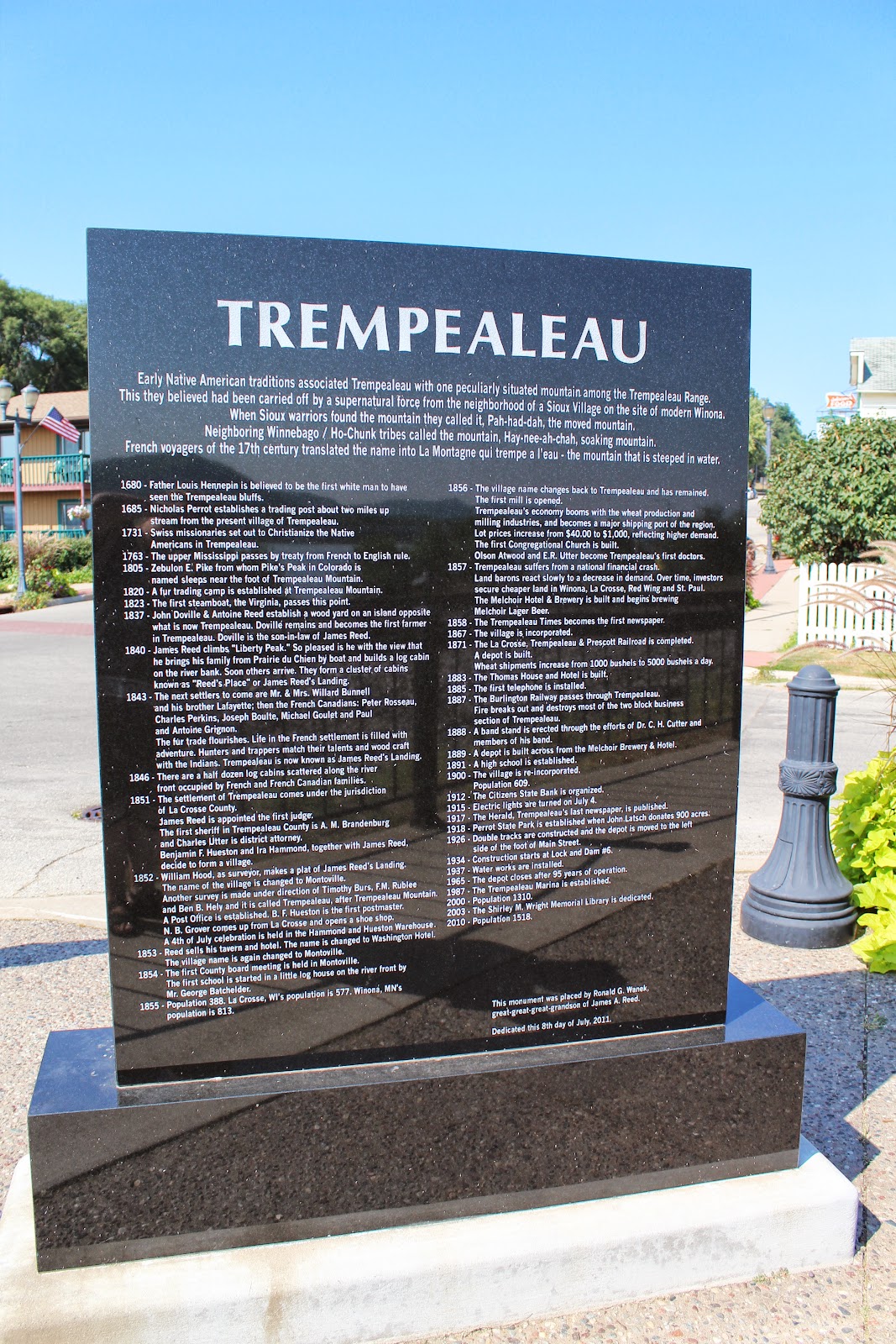 Early Native American traditions associated Trempealeau with one peculiarly situated mountain among the Trempealeau Range. This they believed had been carried off by a supernatural force from the neighborhood of a Sioux Village on the site of modern Winona. When Sioux warriors found the mountain they called it, Pah-had-dah, the moved mountain. Neighboring Winnebago / Ho-Chunk tribes called the mountain, Hay-nee-ah-chah, soaking mountain. French voyagers of the 17th century translated the name into La Montagne qui trempe a l'eau - the mountain that is steeped in water.


1680 - Father Louis Hennepin is believed to be the first white man to have seen the Trempealeau bluffs.
1685 - Nicholas Perrot establishes a trading post about two miles up stream from the present village of Trempealeau.
1731 - Swiss missionaries set out to Christianize the Native Americans in Trempealeau.
1763 - The upper Mississippi passes by treaty from French to English rule.
1805 - Zebulon E. Pike from whom Pike's Peak in Colorado is named sleeps near the foot of Trempealeau Mountain.
1820 - A fur trading camp is established at Trempealeau Mountain.
1823 - The first steamboat, the Virginia, passes this point.
1837 - John Doville & Antoine Reed established a wood yard on an island opposite what is now Trempealeau. Doville is the son-in-law of James Reed.
1840 - James Reed climbs "Liberty Peak." So pleased is he with the view that he brings his family from Prairie du Chien by boat and builds a log cabin on the river bank. Soon others arrive. They form a cluster of cabins known as "Reed's Place" or James Reed's Landing.
1843 - The next settlers to come are Mr. & Mrs. Willard Bunnell and his brother Lafayette; then the French Canadians: Peter Rosseau, Charles Perkins, Joseph Boulte, Michael Goulet and Paul and Antoine Grignon.
The fur trade flourishes. Life in the French settlement is filled with adventure. Hunters and trapers match their talents and wood craft with the Indians. Trempealeau is now known as James Reed's Landing.
1846 - There are a half dozen log cabins scattered along the river front occupied by French and French Canadian families.
1851 - The settlement of Trempealeau comes under the jurisdiction of La Crosse County.
James Reed is appointed the first judge.
The first sheriff in Trempealeau County is A. M. Brandenburg and Charles Utter is district attorney.
Benjamin F. Hueston and Ira Hammond, together with James Reed, decide to form a village.
1852 - William Hood, as surveyor, makes a plat of James Reed's landing.
The name of the village is changed to Montoville.
Another survey is made under direction of Timothy Burs, F.M. Rublee and Ben B. Hely and it is called Trempealeau, after Trempealeau Mountain.
A Post Office is established, B. F. Hueston is the first postmaster.
N. B. Grover comes up from La Crosse and opens a shoe shop.
A 4th of July celebration is held in the Hammond and Hueston Warehouse.
1853 - Reed sells his tavern and hotel. The name is changed to Washington Hotel.
The village name is again changed to Montoville.
1854 - The first County board meeting is held in Montoville.
The first school is started in a little log house on the river front by Mr. George Batchelder.
1855 - Population 388. La Crosse, WI's population is 577. Winona, MN's population is 813.
1856 - The village name changes back to Trempealeau and has remained.
The first mill is opened.
Trempealeau's economy booms with the wheat production and milling industries, and becomes a major shipping port of the region.
Lot prices increase from $40.00 to $1,000, reflecting higher demand.
The first Congregational Church is built.
Olson Atwood and E.R. Utter become Trempealeau's first doctors.
1857 - Trempealeau suffers from a national financial crash.
Land barons react slowly to a decrease in demand. Over time, investors secure cheaper land in Winona, La Crosse, Red Wing and St. Paul. The Melchoir Hotel & Brewery is built and begins brewing Melchoir Lager Beer.
1858 - The Trempealeau Times becomes the first newspaper.
1867- The village is incorporated.
1871 - The La Crosse, Trempealeau & Prescott Railroad is completed.
A depot is built.
Wheat shipments increase from 1000 bushels to 5000 bushels a day.
1883 - The Thomas House and Hotel is built.
1885 - The first telephone is installed.
1887 - The Burlington Railway passes through Trempealeau. Fire breaks out and destroys most of the two block business section of Trempealeau.
1888 - A band stand is erected through the efforts of Dr. C. H. Cutter and members of his band.
1889 - A depot is built across from the Melchoir Brewery & Hotel.
1891 - A high school is established.
1900 - The village is re-incorporated.
Population 609.
1912 - The Citizens State Bank is organized.
1915 - Electric lights are turned on July 4.
1917 - The Herald, Trempealeau's last newspaper, is published.
1918 - Perrot State park is established when John Latsch donates 900 acres.
1926 - Double tracks are constructed and the depot is moved to the left side of the foot of Main Street.
1934 - Construction starts at Lock and Dam #6.
1937 - Water works are installed.
1965 - The depot closes after 95 years of operation.
1987 - The Trempealeau Marina is established.
2000 - Population 1310.
2003 - The Shirley M. Wright Memorial Library is dedicated.
2010 - Population 1518.

Dedicated this 8th day of July, 2011.
The marker is on 1st Street, at its intersection with Main Street, Trempealeau, Wisconsin 54661.

See also,  James Allen Reed (1798-1873) / First Settler in Trempealeau County and Founder of Trempealeau, on the reverse side of this marker. 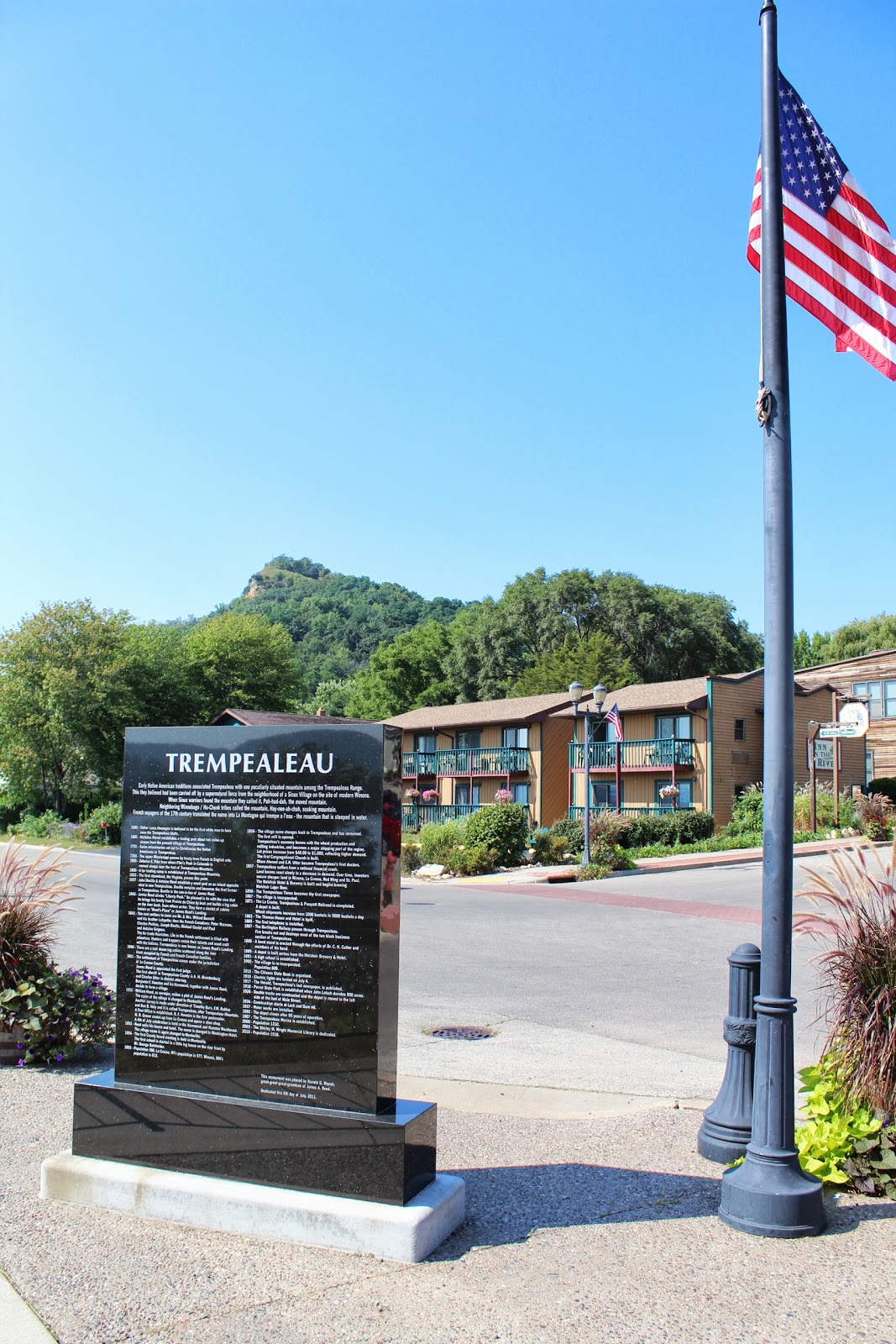 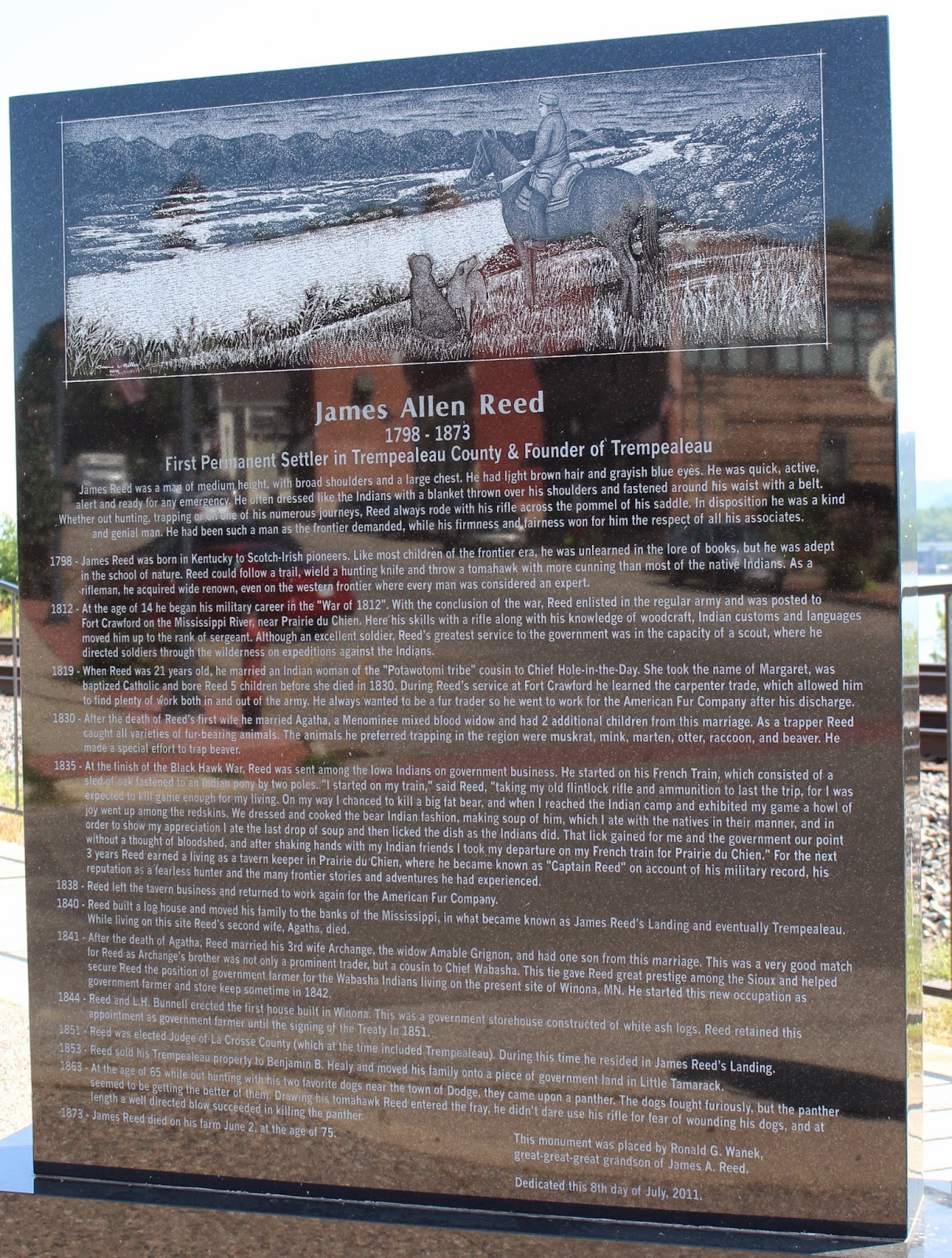 See also,  James Allen Reed (1798-1873) / First Settler in Trempealeau County and Founder of Trempealeau, on the reverse side of this marker. 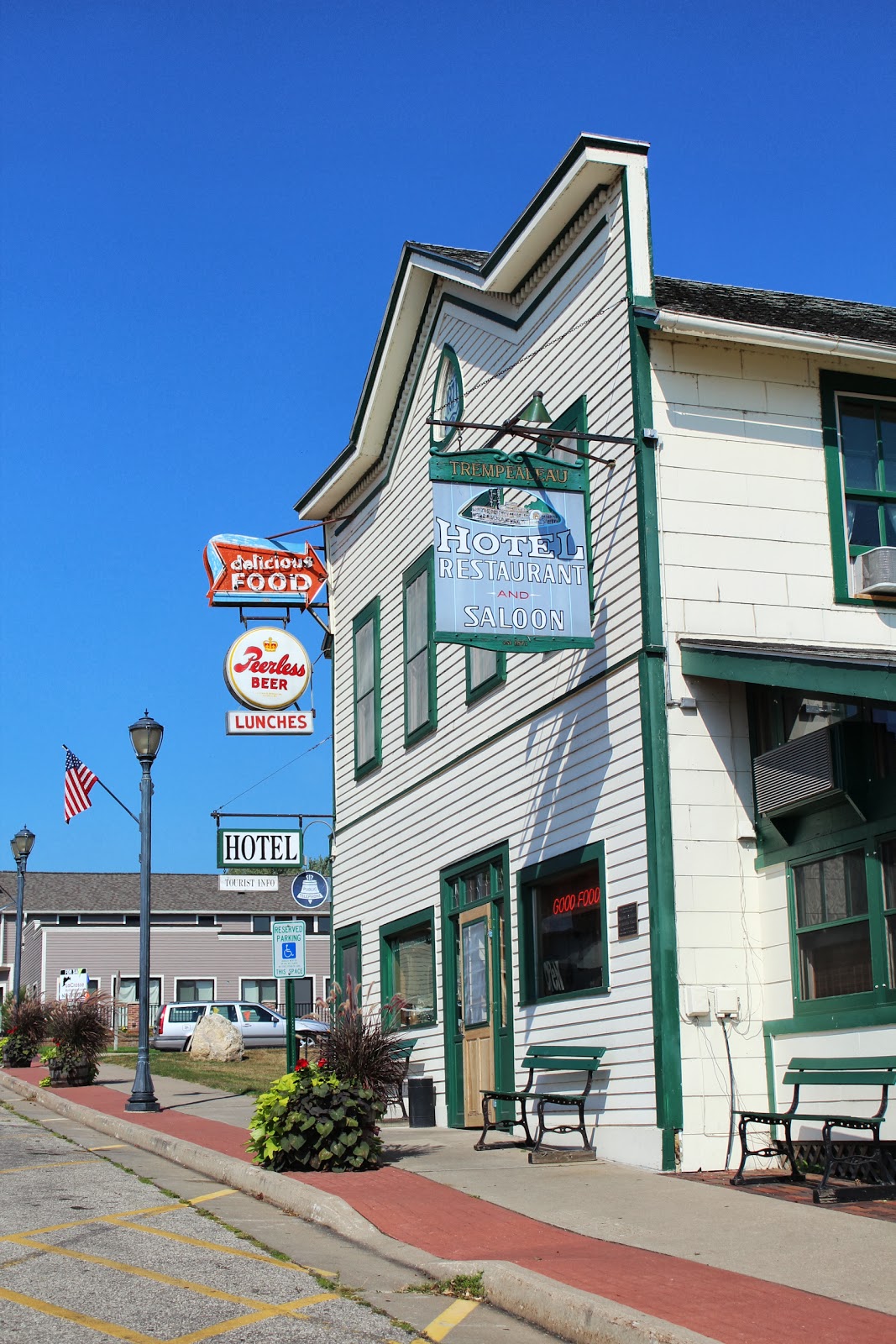 Cool nearby building on Main Street.