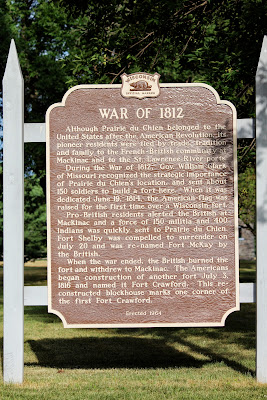 Although Prairie du Chien belonged to the United States after the American Revolution, its pioneer residents were tied by trade, tradition and family to the French-British community at Mackinac and to the St. Lawrence River ports.

During the War of 1812, Gov. William Clark of Missouri recognized the strategic importance of Prairie du Chien's location, and sent about 150 soldiers to build a fort here. When it was dedicated June 19, 1814, the American flag was raised for the first time over a Wisconsin fort.

Pro-British residents alerted the British at Mackinac and a force of 150 militia and 400 Indians was quickly sent to Prairie du Chien. Fort Shelby was compelled to surrender on July 20 and was re-named Fort McKay by the British.

When the war ended, the British burned the fort and withdrew to Mackinac. The Americans began construction of another fort July 3, 1816, and named it Fort Crawford. This reconstructed blockhouse marks one corner of the first Fort Crawford.

The marker is located on the grounds of Wisconsin Historical Site Villa Louis, 521 North Villa Road, Prairie du Chien, Wisconsin 53821. There is a fee to enter the grounds; or you can photograph the marker from the parking area using a zoom lens (see photos below).


There are many interesting markers at this location, including three State of Wisconsin Historical Society markers. Use the "wisconsin historic site villa louis" label at the bottom of this post to easily locate all the Villa Louis site markers on this website.

USS Constitution Museum: Short History of the War of 1812 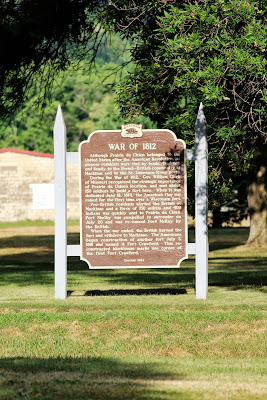 I was able to get this photo with my zoom lens,
before I was on the property. 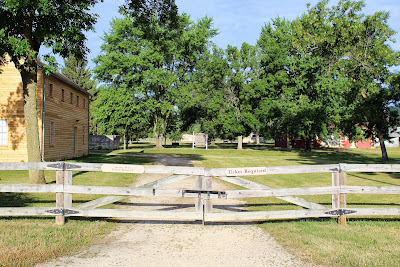 The marker inside the Villa Louis property. 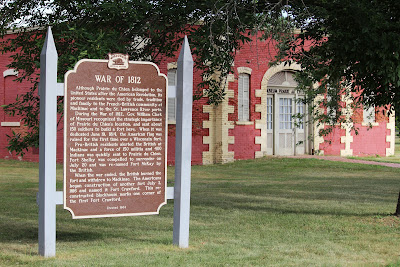 This shot was taken inside the Villa Louis property.

Montage of images relevant to the War of 1812.
This image (or other media file) is in the public domain
because its copyright has expired.
This applies to Australia, the European Union and those countries
with a copyright term of life of the author plus 70 years.
United States public domain tag to indicate why this work is in the public domain in the United States. Note that a few countries have copyright terms longer than 70 years: Mexico has 100 years, Colombia has 80 years, and Guatemala and Samoa have 75 years, Russia has 74 years for some authors. This image may not be in the public domain in these countries, which moreover do not implement the rule of the shorter term. Côte d'Ivoire has a general copyright term of 99 years and Honduras has 75 years, but they do implement the rule of the shorter term.