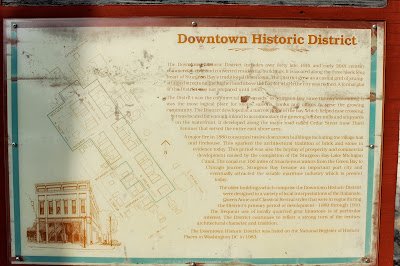 The Downtown Historic District includes over forty late 19th and early 20th century commercial, civic and converted buildings. It is located along the three block long heart of Sturgeon Bay's traditional downtown. The District grew as a casual grid of stump studded streets on the higher land above the bay for which the city was named. A formal plat of the District was not prepared until 1855.

The District was the commercial "crossroads" of Sturgeon Bay since the city's founding. It was the most logical place for shops, saloons, banks and offices to serve the growing community. The District developed at a narrow point of the bay, which helped ease crossing, yet was located far enough inland to accommodate the growing lumber mills and shipyards on the waterfront. It developed along the major road called Cedar Street (now Third Avenue) that served the entire east shore area.

A major fire in 1880 consumed twelve downtown buildings including the village hall and firehouse. This sparked the architectural tradition of brick and stone in evidence today. This period was also the heyday of prosperity and commercial development caused by the completion of the Sturgeon Bay-Lake Michigan Canal. The canal cut 100 miles of treacherous waters from the Green Bay to Chicago journey. Sturgeon Bay became and important port city and eventually attracted the sizable maritime industry which is present today.

The older buildings which comprise the Downtown Historic District were designed in a variety of local interpretations of the Italianate, Queen Anne and Classical Revival styles that were in vogue during the District's primary period of development – 1880 through 1910. The frequent use of locally quarried gray limestone is of particular interest. The District continues to reflect a strong turn of the century architectural character and tradition.

The Downtown Historic District was listed on the National Register of Historic Places in Washington DC in 1983.

The marker is located on the grounds of the Door County Historical Museum, 18 North 4th Avenue, Sturgeon Bay, Wisconsin 54235.

The Door County Downtown Historic District is listed on the National Register of Historic Places: Wisconsin. 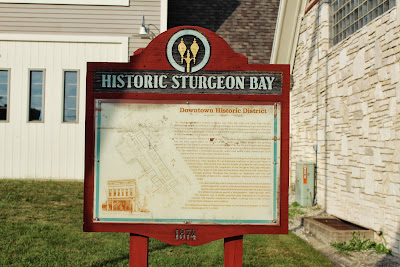 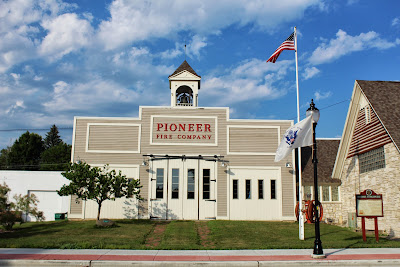 The marker is in front of the Pioneer Fire Company Museum
(the Door County Historical Museum is to the right). 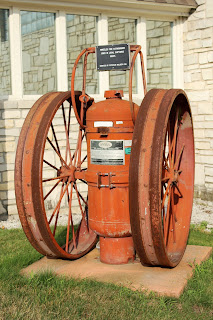 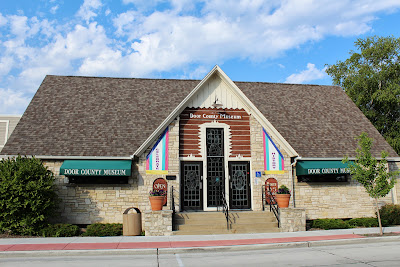 The marker is to the left of the Door County Historical Museum.