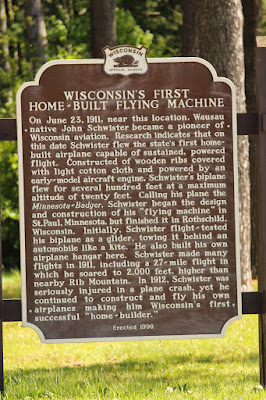 On June 23, 1911, near this location, Wausau native John Schwister became a pio­neer of Wisconsin aviation. Research indicates that on this date Schwister flew the state's first home-built airplane capable of sustained, powered flight. Constructed of wooden ribs covered with light cotton cloth and powered by an early-model aircraft engine, Schwister's biplane flew for several hundred feet at a maximum alti­tude of twenty feet. Calling his plane the Minnesota-Badger, Schwister began the design and construction of his "flying machine" in St. Paul, Minnesota, but finished it in Rothschild, Wisconsin. Initially, Schwister flight-tested his biplane as a glider, towing it behind an automobile like a kite. He also built his own airplane hangar here. Schwister made many flights in 1911, including a 27-mile flight in which he soared to 2,000 feet, higher than nearby Rib Mountain. In 1912, Schwister was seriously injured in a plane crash, yet he continued to construct and fly his own airplanes making him Wisconsin's first successful "home-builder."

The marker is located at the north edge of Rothschild Park on eastbound Kort Street, between Park Street and West Grand Avenue, Rothschild, Wisconsin 54474. 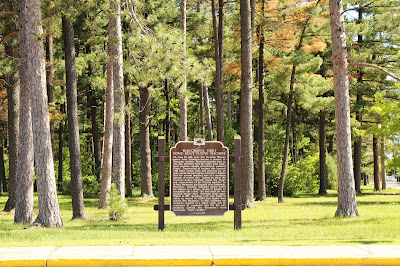 There is no parking at the marker location. I was able to take this photograph at a stop sign adjacent to the marker.