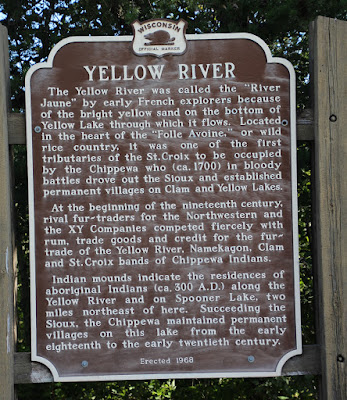 The Yellow River was called the "River Jaune" by early French explorers because of the bright yellow sand on the bottom of Yellow Lake through which it flows. Located in the heart of the "Folle Avoine," or wild rice country, it was one of the first tributaries of the St. Croix to be occupied by the Chippewa who (ca. 1700) in bloody battles drove out the Sioux and established permanent villages on Clam and Yellow Lakes.

At the beginning of the nineteenth century, rival fur-traders for the Northwestern and the XY Companies competed fiercely with rum, trade goods and credit for the fur-trade of the Yellow River, Namekagon, Clam and St. Croix bands of Chippewa Indians.

Indian mounds indicate the residences of aboriginal Indians (ca. 300 A.D.) along the Yellow River and on Spooner Lake, two miles northeast of here. Succeeding the Sioux, the Chippewa maintained permanent vil­lages on this lake from the early eighteenth to the early twentieth century.

The marker is located at a highway pulloff on westbound Highway 70, just before its intersection with Orchard Lane, Spooner, Wisconsin 54801. 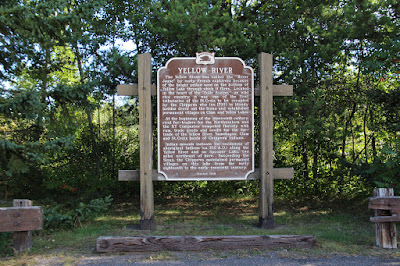 Been there. Seen the Yellow River and Spooner