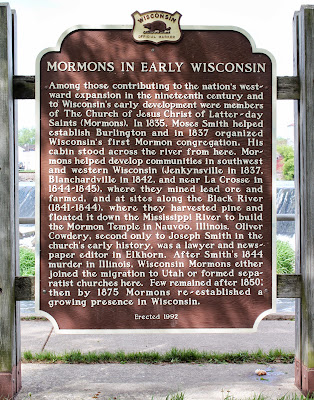 Among those contributing to the nation’s westward expansion in the nineteenth century and to Wisconsin’s early development were members of The Church of Jesus Christ of Latter-day Saints (Mormons). In 1835, Moses Smith helped establish Burlington and in 1837 organized Wisconsin’s first Mormon congregation. His cabin stood across the river from here. Mormons helped develop communities in southwest and western Wisconsin (Jenkynsville in 1837, Blanchardville in 1842, and near La Crosse in 1844-1845), where they mined lead ore and farmed, and at sites along the Black River (1841-1844), where they harvested pine and floated it down the Mississippi River to build the Mormon Temple in Nauvoo, Illinois. Oliver Cowdery, second only to Joseph Smith in the church’s early history, was a lawyer and newspaper editor in Elkhorn. After Smith’s 1844 murder in Illinois, Wisconsin Mormons either joined the migration to Utah or formed separatist churches here. Few remained after 1850; then by 1875 Mormons re-established a growing presence in Wisconsin.

The marker is located in Echo Veterans Memorial Park, overlooking Echo Lake. The entrance to the park is located on westbound Milwaukee Avenue / Highway 36, 1/10th of a mile west of Congress Street, Burlington, Wisconsin 53105.


Church of Jesus Christ of Latter Day Saints: Mormons in Wisconsin: A Closer View of the Early Settlements (1835-1875)


Search for "Mormon settlement near Burlington was bustling in 1840s" to locate an interesting October 8, 2012, "That History Column" article from Kenosha News (I've tried to paste the link, but the Kenosha News website reports "error" from its own link). 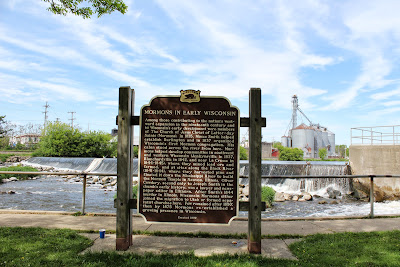 The  marker is at a beautiful location
in Echo Veterans Memorial Park, next to Echo Lake 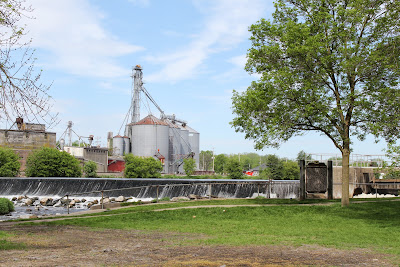 Marker can be seen under the tree,
to the right of center of the above photo. 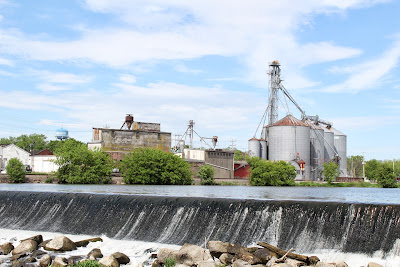