In Memory of Dr. G.G. Mueller 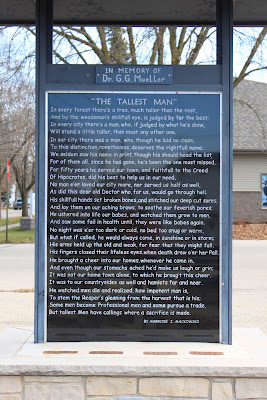 
In every forest there's a tree, much fuller than the rest,
And by the woodman's skillful eye, is judged by far the best;
In every city there's a man, who, if judged by what he's done,
Will stand a little taller, than most any other one.

In our city there was a man, who, though he laid no claim,
To this distinction, nonetheless, deserves the rightful name;
We seldom saw his name in print, though his should head the list,
For of them all, since he has gone, he's been the one most missed.

For fifty years he served our town, and faithfull to the Creed
Of Hipocrates, did his best to help us in our need,
No man e'er loved our city more, nor served us half as well,
As did this dear old Doctor who, for us, would go through hell.

His skillful hands set broken bones, and stitched our deep cut sores,
And lay them on our aching brows, to soothe our feverish pores;
He ushered into life our bases, and watched them grow to men,
And saw some fail in health until, they were like babes again.

No night was e'er too dark or cold, no bed too snug or warm,
But what if called, he would always come, in sunshine or in storm;
His arms held up the old and weak, for fear that they might fall
His fingers closed their lifeless eyes, when death drew o'er her Pall.

He brought a cheer into our homes, whenever he came in,
And even though our stomachs ached he'd make us laugh or grin;
It was not our home town alone, to which he broug't this cheer,
It was to our countrysides as well and hamlets far and near.

He watched men die and realized, how impotent man is,
To stem the Reaper's gleaning from the harvest that is his;
Some men became Professional men and some pursue a trade,
But tallest Men have callings where a sacrifice is made.

The marker is located in a parking lot on the southwest corner of the intersection West Water Street and South Farmer Street, Princeton, Wisconsin

Could not find anything online about Dr. Mueller, except that local VFW Post 10452 also bears his name. 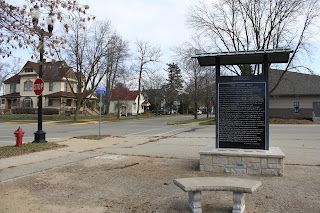 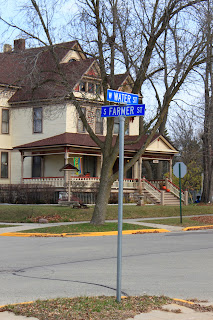 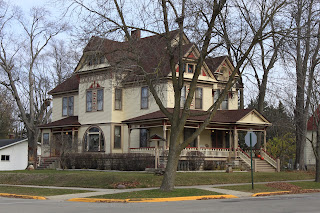