Marker 327: Sinking of the Lady Elgin 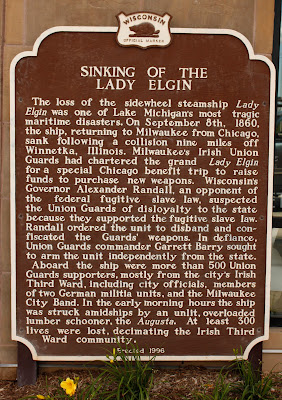 SINKING OF THE
LADY ELGIN

The loss of the sidewheel steamship Lady Elgin was one of Lake Michigan’s most tragic maritime disasters. On September 8th, 1860, the ship, returning to Milwaukee from Chicago, sank following a collision nine miles off Winnetka, Illinois. Milwaukee’s Irish Union Guards had chartered the grand Lady Elgin for a special Chicago benefit trip to raise funds to purchase new weapons. Wisconsin’s Governor Alexander Randall, an opponent of the federal fugitive slave law, suspected the Union Guards of disloyalty to the state because they supported the fugitive slave law. Randall ordered the unit to disband and confiscated the Guards’ weapons. In defiance, Union Guards commander Garrett Barry sought to arm the unit independently from the state.

Aboard the ship were more than 500 Union Guards supporters, mostly from the city’s Irish Third Ward, including city officials, members of two German militia units, and the Milwaukee City Band. In the early morning hours the ship was struck amidships by an unlit, overloaded lumber schooner, the Augusta. At least 300 lives were lost, decimating the Irish Third Ward community.

The marker is mounted on the wall of a building located at 102 North Water Street, at it's intersection with East Erie Street, Milwaukee, Wisconsin 53202. 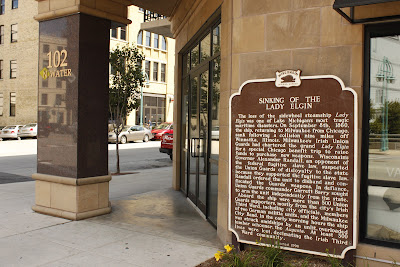 Lady Elgin (September 7, 1860)
This media file is in the public domain;
click here for more information.