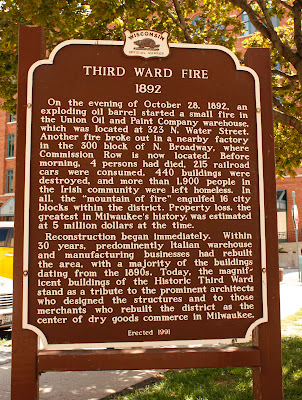 On the evening of October 28, 1892, an exploding oil barrel started a small fire in the Union Oil and Paint company warehouse, which was located at 323 N. Water Street. Another fire broke out in a nearby factory in the 300 block of N. Broadway, where Commission Row is now located. Before morning, 4 persons had died, 215 railroad cars were consumed, 440 buildings were destroyed, and more than 1,900 people in the Irish community were left homeless. In all, the “mountain of fire” engulfed 16 city blocks within the district. Property loss, the greatest in Milwaukee’s history, was estimated at 5 million dollars at the time.

Reconstruction began immediately. Within 30 years, predominantly Italian warehouse and manufacturing businesses had rebuilt the area, with a majority of the buildings dating from the 1890s. Today, the magnificent buildings of the Historic Third Ward stand as a tribute to the prominent architects who designed the structures and to those merchants who rebuilt the district as the center of dry goods commerce in Milwaukee.

The marker is was located adjacent to a parking lot on southbound North Broadway, south of its intersection with East Buffalo Street, near 234 North Broadway, Milwaukee, Wisconsin 53202.

UPDATE February 2017: The marker has been moved from its original location; see comments at the bottom of this post.  As soon as the snow is got, I will visit Milwaukee to rephotograph the sign and provide information regarding the new location.

This area has a lot of history, a lot of historical buildings and a variety of interesting restaurants. There's a walking tour, which I'd like to go back to take later. This is a place one could spend an entire day meandering about. 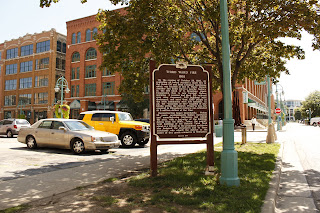 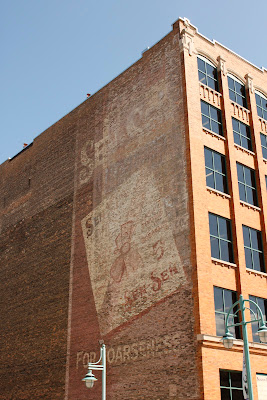 "Ghost Ad" on nearby building (you can't miss it from marker location).

Since these photos were taken, Broadway has had its grassy median ripped out and replaced with angle parking. The marker has been moved a block south, to the NW corner of Menomonee and Broadway. I tried locating it by the GPS coordinates, but it was not there. I finally got out of the car and walked around looking for the ghost sign. When I saw that, I spotted the sign at the other end of the block.

Thank you, Jay, for the update on the marker's location. I'll have to make another trip to Milwaukee to rephotograph. Parking is always so difficult in the 3rd Ward. Maybe ripping out the median has allowed for extra parking spots?